The Laying on of Hands: Recently I read with great interest a Medscape article titled, “Patients Lose When Doctors Can’t Do Good Physical Exams”.  You can read the article here: http://www.medscape.com/viewarticle/825442 but the crux is that as medicine becomes more and more dependent on sophisticated technology, the physical exam is in danger of becoming a lost art.

This Medscape article made me think about the experiences of our ME/CFS patient community and the frequency of physical examination. I reached out to Dr. Peter Rowe whose research we have funded that deals with neuromuscular strain and range of motion. This is the first in a series of blog posts from Dr. Peter Rowe of Johns Hopkins University titled “Is the physical exam in CFS normal?” We are certain that this information will be of great value to both you and your doctor and will clearly illustrate the value of laying on of hands in the physical examination of ME/CFS.

Is the physical examination normal in CFS?

Papers in the early 1990s described a low yield of physical examinations in patients with chronic fatigue and CFS.1 Although there were some notable counter-arguments made by Komaroff—describing sore throat and swollen lymph nodes, as well as a 10-20% prevalence of abnormal Romberg tests (Romberg test is a neurological exam that assesses balance while standing)2—most reviews of CFS included statements like the one that appeared in the 2002 Australian CFS Guidelines: “Characteristically, there are no abnormal physical findings in people with CFS.”3

The absence of abnormalities on the physical examination, especially when contrasted with the profound functional impairment in CFS, was often interpreted to be consistent with a largely psychosomatic origin of the illness. Research in the past 20 years, however, provides a decidedly different view.  In this three-part blog post, Dr. Peter Rowe will describe three groups of abnormalities found on physical examination.

One of the most readily apparent abnormalities on the examination of those with CFS is that heart rate and blood pressure abnormalities are present, sometimes at rest, and more consistently during relatively brief periods of upright posture. In response to standing or upright tilt table testing, individuals with CFS have a higher prevalence of neurally mediated hypotension (NMH) and postural tachycardia syndrome (POTS), or both (Figure 1). The prevalence of these and other blood pressure and heart rate abnormalities is higher in adolescent than in adults, but even in the absence of objective changes in blood pressure or heart rate, orthostatic (upright) stress in individuals with CFS of all ages provokes characteristic daily symptoms of increased fatigue, lightheadedness, mental fog, or headache. In adolescents, all published controlled studies have shown a numerically higher prevalence of orthostatic intolerance in CFS than in healthy individuals (4 of 5 reporting statistically significantly differences), and all studies looking at autonomic tone show a sympathetic predominance of heart rate variability, especially in response to orthostatic stress. 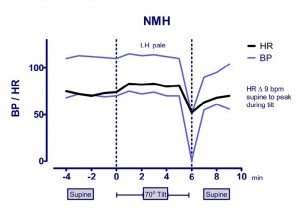 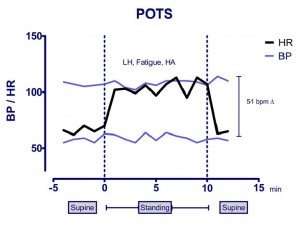 NMH occasionally can be provoked by a brief standing test, but more commonly requires a more prolonged head-up tilt table test. The median time to provoke a drop in blood pressure in our tilt laboratory in the mid-1990s was 28 minutes,4 although symptoms are usually exacerbated shortly after the patient is tilted upright.

The diagnosis of POTS in adults requires a ≥ 30 beat per minute (bpm) increase in heart rate (HR) during 10 minutes upright when compared to baseline supine values, or a HR increase to ≥ 120 bpm, together with the reproduction of typical orthostatic symptoms. Normative data on healthy young people showed that the adult HR criteria overdiagnosed POTS, so in adolescents the diagnosis now requires a ≥ 40 bpm HR increase in the first 10 minutes of head-up tilt or standing, or a HR ≥ 120 bpm.5 Some individuals with POTS at an early point of tilt testing subsequently develop a more profound drop in BP, consistent with delayed orthostatic hypotension or with NMH. 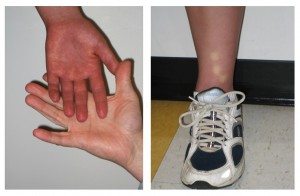 Along with the changes in heart rate and blood pressure, a striking physical finding among those with CFS and orthostatic intolerance is a purple discoloration in the dependent limbs termed acrocyanosis (Figure 2). Acrocyanosis is readily apparent if the patient is examined in shorts, seated on the examination table, with the legs hanging down. This finding can be differentiated from Raynaud’s phenomenon by the absence of blanching of the fingers or toes, and by the fact that hands and feet are diffusely discolored.

Why does recognition of orthostatic physical examination findings matter? Open treatment studies show that people with CFS can enjoy improved function with standard measures to manage orthostatic intolerance. That management involves lifestyle adjustments, compression garments, and increased salt and fluid intake, along with judicious use of medications. These treatments provide another avenue for a pragmatic, individualized approach to symptoms in those with CFS.

Studies by MacLean and Allen in the 1940s had drawn attention to the similarity between the symptoms of neuromyasthenia (an older term for what we now call CFS) and the symptoms of patients who experienced orthostatic tachycardia and hypotension after assuming an upright posture. Most of the latter group experienced orthostatic exhaustion, blurring of vision, weakness on exercise, and syncopal episodes,6,7 familiar problems for those with CFS. Although these observations were neglected for several decades, the weight of the evidence now suggests that all subjects with CFS deserve careful assessment of their heart rate, blood pressure, and symptomatic responses to at least 10 minutes of quiet upright posture. The British NICE guidelines that strongly recommend against the routine use of orthostatic testing8 need to be revised in light of the available and compelling data.

Fig 1a. NMH. The hemodynamic response to upright tilt testing in an individual with CFS. Note the early onset of orthostatic symptoms of lightheadedness (LH) and pallor, without early HR elevations, following at a relatively early point by profound hypotension and relative bradycardia, consistent with NMH.

Fig 1b. POTS. The hemodynamic response to quiet standing in an individual with CFS. Note the normal supine heart rate and the dramatic 51 beat per minute change in heart rate with standing, accompanied by lightheadedness, fatigue, and headache, without major changes in blood pressure.

Pearls of Wisdom from a CFS Physician, part 3