Myalgic encephalomyelitis (ME), previously called chronic fatigue syndrome (CFS), is a complex and debilitating multi-system, chronic disease with a serious impact on one’s quality of life. While “ME/CFS” is the preferred name by many, this disease has also been called systemic exertion intolerance disorder (SEID), chronic fatigue immunity deficiency syndrome (CFIDS), or post-viral fatigue syndrome (PVFS).

At this time, the cause of ME/CFS is not fully understood. There is no diagnostic test, no FDA-approved treatment, and patients often suffer for life.

Everyone is at risk. ME/CFS may begin as early as age 10 and as late as age 77[1]. Between 836,000 and 2.5 million Americans suffer from ME/CFS[2] and estimates vary from 17 – 24 million people with ME/CFS worldwide. Although research has shown that ME/CFS is about two to four times more likely to occur in women than men[3], ME/CFS strikes people from every age, racial, ethnic, and socioeconomic group. Some studies show that ME/CFS may be more common in minority groups.[4]

What Are the Symptoms of ME/CFS?

If you think you may have ME/CFS, take our quick online quiz. 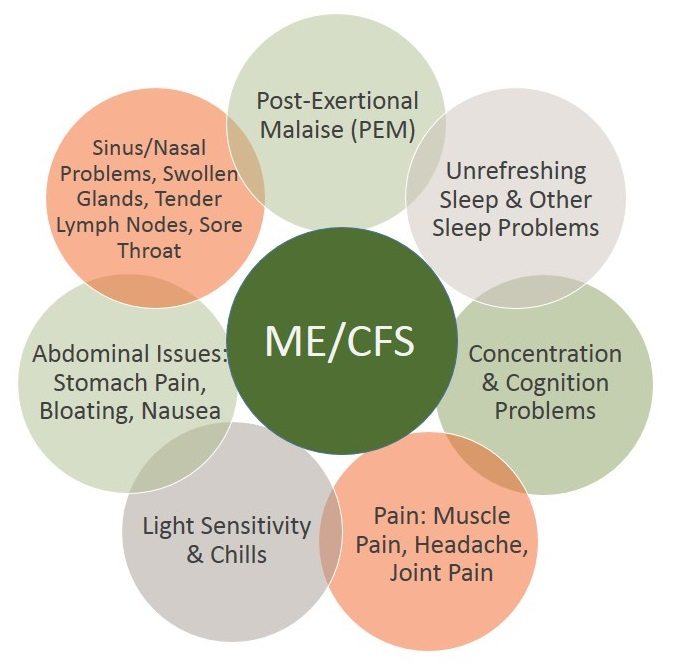 ME/CFS symptoms, which can often be made worse by standing upright, include:

Because these symptoms are shared with many other illnesses—and because many of these conditions lack a diagnostic test or biomarker—identifying which illnesses are present can be difficult. Some patients receive diagnoses for multiple conditions. Common conditions that occur along with ME/CFS (co-morbidities) include the following:

How Is ME/CFS Diagnosed?

Although challenging to do so, experienced clinicians recognize ME/CFS and it is no longer a diagnosis of exclusion. The 2015 Institute of Medicine diagnostic protocol is: 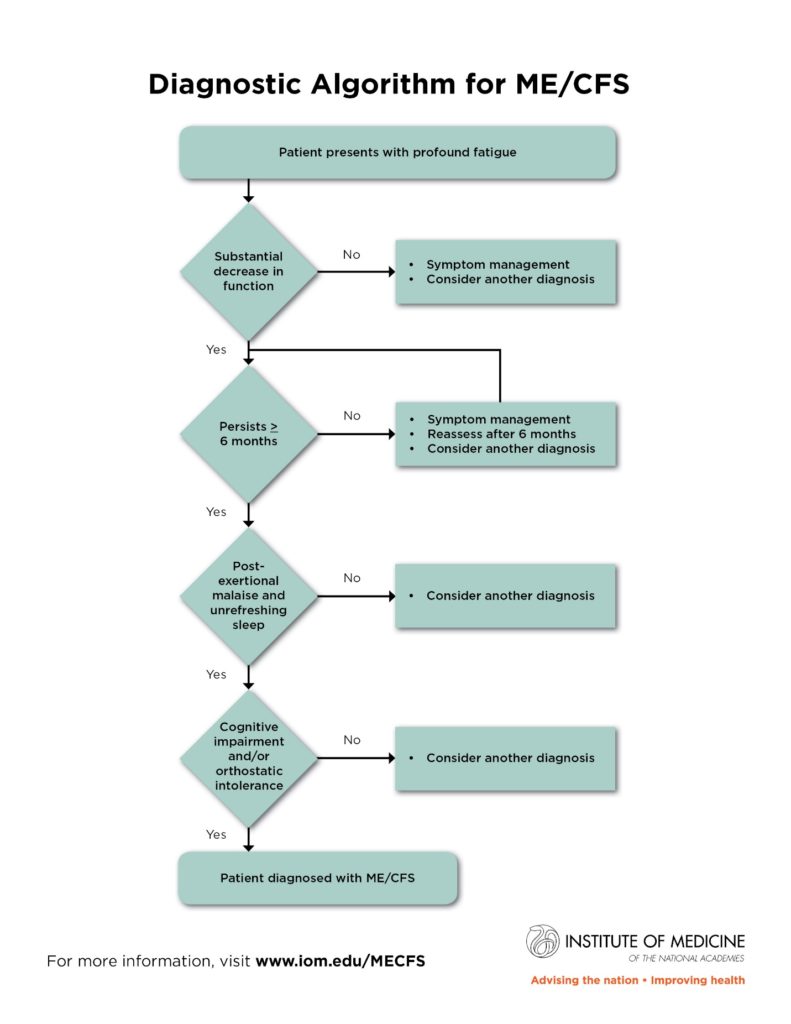 Studies show that less than 9-16 percent of ME/CFS patients in the United States have been properly diagnosed[5]. Diagnosing ME/CFS is a challenging process, because there is still not one diagnostic test or biomarker that’s conclusive. Getting a definitive diagnosis often takes months or even years.

Diagnosis can also be complicated by the fact that symptoms and severity of ME/CFS vary considerably from person to person and even day to day. Seek care first from the healthcare provider who knows you best and will work with you to rule out other possible causes of symptoms and identify other conditions.

In many cases, people who believe they may have ME/CFS must educate their physicians about the disease as less than one third of medical schools teach specific information about ME/CFS.[6]

How Is ME/CFS Treated?

There is currently no FDA approved treatment for ME/CFS. As neither a cause nor cure for ME/CFS has been identified, treatment is directed at relieving symptoms. Although there’s no single approved treatment that addresses the disease at its core, there are treatments that can improve symptoms, increase function, and allow people with ME/CFS to engage in activities of daily living.

While extremely frustrating, individuals with ME/CFS learn over time what works best for them. What is quite effective for one patient may not be effective at all for someone else. Sleep problems, pain, heartrate irregularities, gastrointestinal difficulties, allergies, and depression are some of the symptoms that can potentially be relieved by treatment.

Finding a treatment is one of the top priorities of Solve M.E.’s research program. Learn more about our efforts in our “Research Programs” section. Alternative therapies are also often explored in an attempt to relieve symptoms. Acupuncture, hydrotherapy, yoga, tai chi, and massage therapy have been found to help and are often prescribed for symptom management.

If you think you may have ME/CFS, take our quick online quiz.

The severity of ME/CFS varies greatly from patient to patient, with some people able to maintain fairly active lives. For others, ME/CFS has a profound impact. About 25 percent of people with ME/CFS are housebound or bedbound as a result of their illness[7]. For many, there is often a pattern of relapse and remission. Most symptoms are invisible to others, which makes it difficult for family members, friends and the public to understand the challenges of the disease.

Rob P.
“It feels like I always have the flu, only much worse. It feels like the world is always moving, and I can’t find my bearings.” 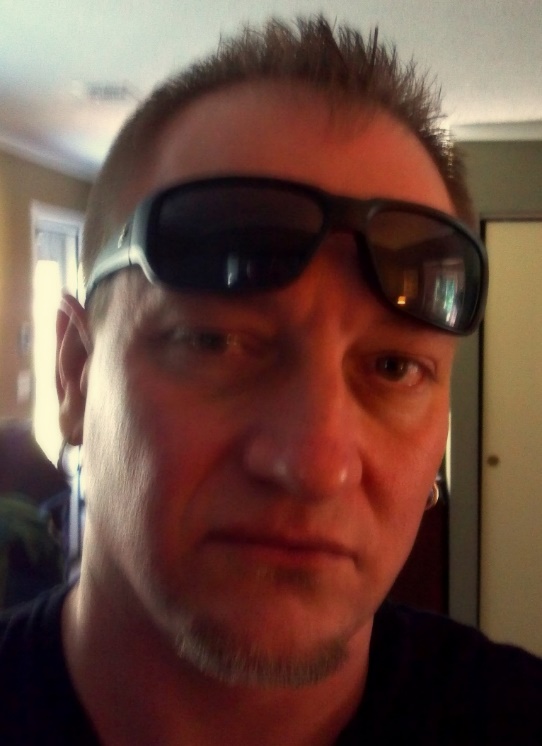 Conella B.
“When my symptoms first occurred, I was diagnosed with the flu during June, July, and August during off-flu season. Doctors suspected that I was a hypochondriac.” 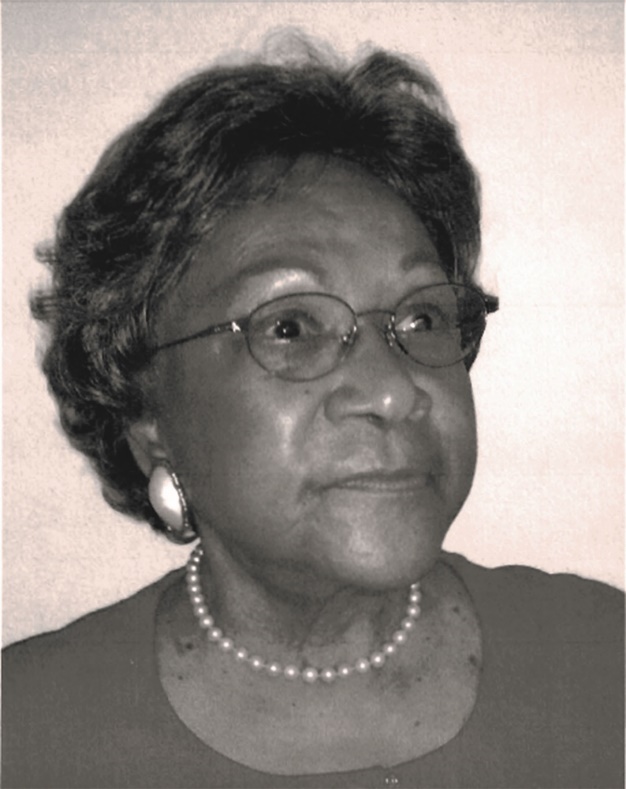 Kelly S.
“Sometimes it feels as if my body is shutting down on me. I think about going to the emergency room, not even able to make it to the car if I decide to go. I rarely decide to anyway, because every time I ever have gone for my invisible illnesses, they have never once been able to help me in any way.” 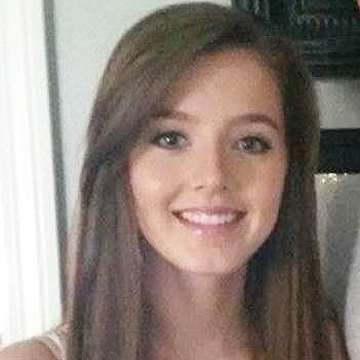 Read the stories of those living with ME/CFS in our “Humans of ME/CFS” project.

More severe ME/CFS patients have been found to be more functionally impaired than those with other disabling illnesses such as type 2 diabetes, congestive heart failure, hypertension, depression, multiple sclerosis, and end-stage renal disease. These same patients have the lowest median quality of life scores of any disease tested, including lung cancer, rheumatoid arthritis, and brain stroke.