In the 2nd part of this three-part blog series on physical examination in ME/CFS, Dr. Peter Rowe discusses joint hypermobility.  You can read the first blog post in the series where Dr Rowe discussed orthostatic heart rate and blood pressure changes HERE.

Some patients meeting the criteria for CFS have a genetic disorder of connective tissue known as Ehlers-Danlos syndrome (EDS). Those with EDS have stretchy skin, very loose, hypermobile joints that often dislocate easily, along with delayed wound healing, fragile skin, and a tendency to develop an early onset of varicose veins. Those with EDS have chronic fatigue and widespread pain of uncertain cause, which of course overlaps with the central features of CFS.

We first drew attention to this association in 1999, noting that those with CFS and orthostatic intolerance had a much higher prevalence of EDS than expected.1 We then went on to examine whether those with CFS had a higher prevalence of joint hypermobility. Although we might expect less flexibility in a population that has had at least 6 months of reduced activity, in that study, 60% of new adolescent patients with CFS met criteria for joint hypermobility, compared to just 24% of healthy controls.2 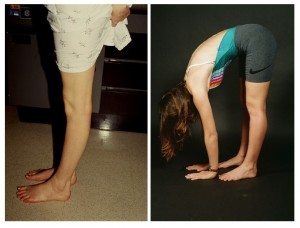 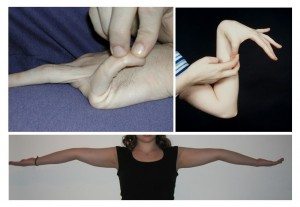 The assessment of joint hypermobility takes only a couple of minutes, and can easily be performed using a goniometer for accurate measurement of joint angles. The most commonly used series of maneuvers is the 9 point Beighton score, as shown in the pictures above. It should be noted that the Beighton score does not do a good job of evaluating for laxity in the hips and shoulders, but it is a useful screening tool. 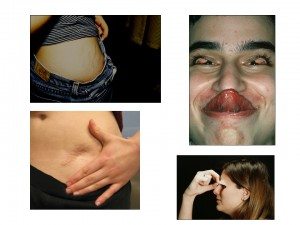 Other findings on the examination in those with EDS can include increased extensibility of the skin, abnormally widened and thin (“papyraceous”) scars, easy eversion of the eyelids, and stretch marks (striae) even in the absence of excessive changes in weight. Examples of these findings are shown in the pictures to the right.

Since the publication of these results, a number of studies have confirmed that those with joint hypermobility have more orthostatic symptoms and a reduced tolerance of upright posture,3 and that fatigue is a prominent contributor to lower quality of life in EDS.4 New work from investigators in Belgium confirms that those with hypermobile EDS have high rates of autonomic symptoms, abnormal heart rate responses to upright posture, and other features of autonomic dysfunction.5,6

Why does the assessment for joint hypermobility matter? Joint hypermobility is associated with other co-morbid disorders such as temporomandibular joint dysfunction, and the laxity in ligaments often contributes to arthralgias and myalgias. Better ascertainment of these problems can lead to more focused therapy directed at pain, and physical treatments directed at biomechanical dysfunctions.7 Beyond the effects on joints, connective tissue laxity also affects the blood vessel walls. The increased distensibility in blood vessels may be a factor in the early development of varicose veins in those with EDS. Vascular stretch also is thought to allow increased blood pooling in the dependent circulation during upright posture, leading to diminished blood return to the heart, and thus to orthostatic intolerance symptoms. Given the high prevalence of skin and joint laxity in those with CFS, and the contribution of connective tissue abnormalities to the development of orthostatic intolerance, we recommend that all those with CFS undergo screening with a Beighton score, and that clinicians look carefully for the skin changes of EDS in their patients with CFS.

Fig 3b: On each side, score 1 point for >10o of hyperextensibility at the knee, and 1 point for the ability to place the palms on the floor.

Fig 4: Other features of EDS: clockwise from the top left, stretch marks (striae) in a non-obese individual who has not had excessive weight change, easy eversion of the upper eyelids and Gorlin’s sign (the ability to touch the tongue to the tip of the nose, increased extensibility of the skin of the upper eyelid, and wide, thin scarring at the site of wound dehiscence after a simple laparoscopy incision.