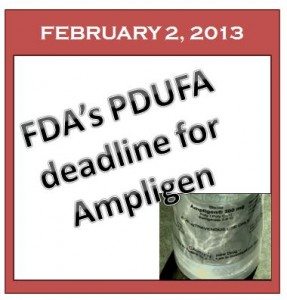 Today, Feb. 2, 2013, is the expected date for the U.S. Food and Drug Administration (FDA) to deliver its decision on the application by Hemipsherx Biopharma to market rintatolimod (Ampligen) for the treatment of chronic fatigue syndrome (CFS). The deadline for a decision is driven by the tightly regulated review calendar under FDA’s Prescription Drug User Fee Act, known as PDUFA or “pa-doof-a.” Hemipsherx submitted its application to FDA on July 31, 2012. This is the second time Hemispherx has submitted an application for marketing approval, which dictates that FDA respond within six months. On  Aug. 10, 2012 the FDA wrote, “We consider this a complete, class 2 response to our November 25, 2009, action letter. Therefore, the user fee goal date is Feb. 2, 2013.”

The date falling on a Saturday led many to expect that an announcement about the decision would be announced by Friday, Feb. 1. When FDA approves a drug, it issues a press release, as it did earlier this week for the new drug Kynamro to treat a rare condition called homozygous familial hypercholesterolemia. (Read the Kynamro press release here.) FDA notifies the manufacturer of its decision through a detailed letter that includes stipulations for labeling the drug and any additional required studies that must be done before marketing or after. Approval letters are made public, usually within a day or two of the press announcement. The FDA letter to Genzyme for Kynmaro provides a good example of post-marketing requirements FDA can dictate; you can read it here.

If applications are declined by FDA, the agency notifies the manufacturer through a letter that is not made public by FDA. The manufacturer decides how the news is communicated to its shareholders and the public.

So, no news (as of yet) could mean one of two things:

While the community waits for the decision or word of the decision, some are taking new actions with the hope of influencing a positive outcome for the drug and access to it. 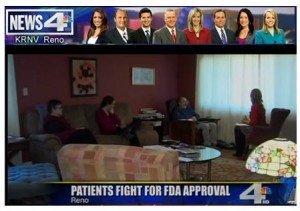 Advocate Robert Miller has relayed his positive benefit from Ampligen at many public meetings, including at the Dec. 20, 2012 meeting of the FDA’s Arthritis Advisory Committee that reviewed the manufacturer’s data and FDA’s analysis of it as well as oral testimony from 30 members of the public and 750 written statements submitted by the public. After that meeting, Robert helped publicize an online petition that demanded approval of the drug and he presented copies to officials at FDA, the Department of Health and Human Services and Congress. On Jan. 29, 2013, Robert began a hunger strike that he has vowed to continue until all ME/CFS patients have access to the drug. Robert and fellow Ampligen recepient Dr. Janet Smith were interviewed by Reno’s NBC affililate, KRNV, on Jan. 30: http://bit.ly/Vv50s0. Robert has posted a videotaped message at http://bit.ly/X6pgBA.

Robert has enlisted help from many other advocates to contact agency and department officials and members of Congress. Blogger Cort Johnson wrote about Robert’s efforts and the email campaign he has launched. Cleve Jones, well-known HIV/AIDS activist and founder of the AIDS quilt project, is supporting Bob’s effort too. He writes,

“My friend is on a hunger strike to get the first medicine approved for his severe case of chronic fatigue syndrome. FDA is likely to deny the drug this weekend. We know we wouldn’t be where we are today if some of us hadn’t protested inaction by federal agencies on AIDS treatments. Email: kathleen.sebelius@hhs.gov  Urge FDA to approve Ampligen, so all CFS patients can have just one treatment option. CFS patients suffer without any treatments, and I can remember those days in my life. I urge Secretary Sebelius to approve Ampligen for CFS and apply what we learned with HIV about getting treatments to patients like every minute counts.”

Other than the KRNV story, news coverage about the impending decision has been light, with just a few articles posted on financial/investing sites: The Street (Feb. 1); Stockhouse (Feb. 1); MSN Money (Feb. 1). These stock analysts predict the drug application will be rejected on the basis of the advisory committee’s 8-5 vote against approval. John George at the Philadelphia Business Journal reported on Jan. 11, 2013, that Hemispherx has “issued a statement saying they will ‘seek to do everything necessary to confirm in a scientifically rigorous manner that [Ampligen] is a safe and effective treatment for CFS.’” On Jan. 12, David Pittman at MedPage Today wrote a critical review of the patient testimony delivered at the advisory committee meeting.

Dr. Nancy Klimas issued a press release through her university press office on Jan. 25, 2013, urging FDA approval of the drug as a means to “open the door for other targeted therapies now.” The release was reposted by aggregators but did not generate any news coverage. Press releases issued by several law firms seek stockholder-plaintiffs to participate in legal action against Hemispherx, for alleged violations of securities laws, based on information released as part of the FDA advisory committee documentation.

We will continue to update you about the decision and news coverage it generates.

Watch now! The Congressional Roundtable on Women’s Chronic Illness During a Pandemic