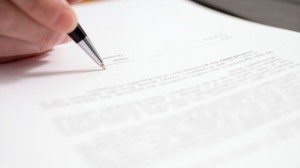 The Solve ME/CFS Initiative is one of 12 organizations that have signed a letter asking the heads of the Centers for Disease Control (CDC) and the Agency for Healthcare Research and Quality (AHRQ) to examine the issues raised by journalist David Tuller’s analysis of the U.K.’s £5 million PACE trial for ME/CFS.

Tuller published a lengthy investigative report outlining serious concerns with the conduct, analyses and results of the PACE trial, which investigated the efficacy of cognitive behavioral therapy (CBT) and graded exercise therapy (GET). Tuller, who is academic coordinator of the concurrent master’s degree program in public health and journalism at the University of California-Berkeley, writes about his journey covering ME/CFS here. Other reporters and researchers have also expressed their serious concerns regarding the trial. Six university-based researchers called on The Lancet to “seek an independent re-analysis of the individual-level PACE trial data.”

The PACE treatment approach is based on the theory that the debility of ME/CFS is caused by presumed deconditioning, which is the result of patients’ belief that they have an organic disease and that activity will harm them. CBT and GET is claimed to lead to improvement and even “recovery” by reversing patients’ “illness beliefs,” “fear of activity” and deconditioning. 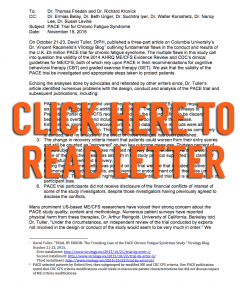 PACE is hugely influential in how patients are treated in the media, by society and especially in medical practice. In the United States, many ME/CFS clinical guidelines, including CDC’s, recommend CBT and GET, based in part on the PACE trial. This is true even in medical education and clinical guidelines published since the 2015 Institute of Medicine (IOM) report. The IOM report makes it clear that the problem is not deconditioning. It states that the hallmark of the disease is a systemic intolerance to exertion, which would be exacerbated by PACE’s treatments.

The impact of PACE is also seen in scientific evidence reviews. In 2014, the AHRQ recommended CBT and GET, based in part on PACE, which it ranked as a “good” study. This is significant because the AHRQ Evidence Review can be used to support CBT and GET recommendations in future journal articles and in the clinical guidelines of any country. This evidence review already has been used for this purpose in at least one U.S. clinical guideline.

Apart from concerns with the conduct of PACE, the AHRQ Evidence Review recommendation for CBT and GET for all ME/CFS patients is questionable since the review itself acknowledged that PACE’s Oxford definition was overly broad and could include patients who do not have ME/CFS. NIH’s 2015 Pathways to Prevention report felt this problem was so serious that it called for the Oxford definition to be retired.

Continuing to use PACE and similar Oxford definition studies to support treatment recommendations for all ME/CFS patients is an issue of grave concern because it confuses doctors on the nature of the disease and results in medical treatment that can harm patients.

• CDC remove all recommendations and risk and prognosis statements based on PACE and other Oxford studies from its current and planned medical education materials;

• AHRQ issue a revision of its Evidence Review in light of the concerns with PACE and with the Oxford definition studies as noted by NIH’s Pathways to Prevention report;

• HHS use its leadership position to communicate these concerns to other U.S. mainstream clinical guidelines providers; and,

• HHS call upon The Lancet to ensure an independent re-analysis is conducted.

ME/CFS patients can add their voices to this request by signing this accompanying petition. While the petition is directed to CDC and AHRQ, the U.S. agencies’ response will affect other countries as well, so patients from all countries are encouraged to sign.

Pearls of Wisdom from an ME/CFS Physician, part 2