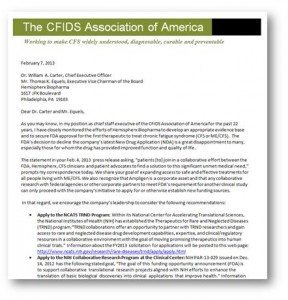 The recent decision by the Food and Drug Administration (FDA) to decline the latest New Drug Application (NDA) from Hemispherx Biopharma for Ampligen is a great disappointment to many, especially those for whom the drug has provided improved function and quality of life. The Solve ME/CFS Initiative, founded in 1987 by patients and for patients, is steadfastly committed to fostering the rigorous science required to establish the safety and effectiveness of treatments for ME/CFS. We are also determined to ensure that decisions made by FDA about treatment studies and product approvals reflect a deep and comprehensive understanding of the serious unmet medical need ME/CFS represents.

Successful drug development efforts must overcome substantial challenges from early science to adequate clinical study in humans to strict regulatory review and approval. Only 1 in 5000 compounds makes it from the lab to the pharmacy shelves. Our organization is actively engaged in many steps along that path to accelerate the process in order to expand options for safe and effective treatment for all people living with ME/CFS. At least one million Americans and as many as 17 million adults, teens and children worldwide await the first approved therapy for ME/CFS.

To ignite greater urgency and foster collaborative action between all the stakeholders involved in successful drug development, today I made requests for action of Assistant Secretary for Health Dr. Howard Koh and the top two executives at Hemispherx Biopharma. These letters were also copied to members of the Department of Health and Human Services CFS Advisory Committee.

You can read the letters here:

We encourage all those affected by ME/CFS to make their voices heard. The Association will seek to maximize your efforts by providing information and education on how to most effectively frame the discussion. We will continue to lead the way, empowering all those affected by ME/CFS to best advocate for themselves as we advocate alongside you. With you and for you, we march forward.

Share your views about treatment research or express your support for the actions recommended by the Solve ME/CFS Initiative on Feb. 7, 2013.

UPDATE (March 4, 2013):
Secretary for Health Kathleen Sebelius has written to Senator Harry Reid (D-NV) about the Department of Health and Human Services efforts to foster development of drugs to treat ME/CFS and otherwise alleviate suffering. Read the Letter from Secretary Sebelius to Senatory Reid: http://bit.ly/sebelius-reid 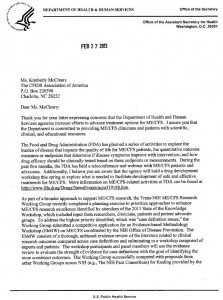 Assistant Secretary for Health Howard Koh responded to my letter with information about the upcoming FDA workshop on drug development in ME/CFS as well as a new NIH initative to address the case definition for CFS. Case definition was identified by the Trans-NIH ME/CFS Research Working Group as a high priority and resulted in an application to the NIH Office of Disease Prevention for an “Evidence-Based Methology Workshop” (EbMW) on ME/CFS.  According to Dr. Koh’s letter, “the first organizational meeting for the EbMW was held on Feb. 19, 2013. Read the letter from Dr. Koh here: Letter from Assistant Secretary Koh to Kim McCleary: http://bit.ly/Koh-McCleary

There has been no response yet to the letter I sent to Hemispherx, nor to a request for a copy of the Complete Response Letter (CRL) sent by FDA to the company. The CRL outlines the deficiencies in the application for approval, as well as corrective measures that the FDA recommends be taken.

The next meeting of the federal CFS Advisory Committee will be held May 22-23, 2013 in Washington, D.C. With this flurry of agency activity, the committee — and the community — will have much to discuss.

Association Offers its Feedback on the FDA Draft Guidance