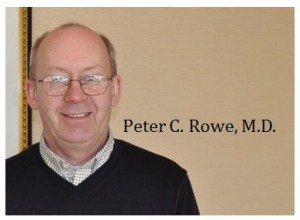 It’s been more than 70 years since the first research appeared linking rapid heartbeat (tachycardia) and low blood pressure (hypotension) with neurasthenia, or abnormally sensitive nerves. Yet for decades, the research sat forgotten, in part because of the medical field’s insistence that the lower the blood pressure, the better. “But what they forgot is that problems can be present in those who lie at the bottom of any bell-shaped curve in biology, just as they are at the top,” says Peter C. Rowe, M.D., professor of pediatrics and director of the Chronic Fatigue Clinic at Johns Hopkins Children’s Center in Baltimore, MD. So people with chronic fatigue syndrome (CFS), who often exhibit hypotension along with tachycardia “were patted on the head and told how lucky they were that they wouldn’t have a stroke.”

Now, though, that old research is getting more attention, as are the circulatory problems that often accompany CFS. For, based on the work of Dr. Rowe and others, it appears that the three conditions — rapid heartbeat, low blood pressure, and abnormal nerve sensitivity — may hold a critical clue to CFS.

It’s a hypothesis that Dr. Rowe and his team plan to explore in depth with their recently awarded CFIDS Association grant. The results, he says, could lead to better ways of diagnosing, categorizing and treating the condition.

Dr. Rowe’s current research began, in part, several years ago when he treated a young girl with CFS and recurrent fainting. She didn’t want to try any medications, he recalls, although she agreed to increase her fluid and salt intake to increase her blood pressure. Her mother asked Dr. Rowe if he thought physical therapy might help. “Go ahead and see if it works,” he told her.

Within two months, the girl’s fainting episodes had significantly improved and she felt 90 percent better. “I was quite astonished, because I thought she would almost certainly need medication,” he remembers. After meeting the girl’s physical therapist, he realized the approaches the physical therapist used might provide helpful insights into CFS symptoms.

Today, that physical therapist, Rich Violand, is part of the grant Dr. Rowe has received from the CFIDS Association. The goal: examine scientifically what he saw in that young patient and others since: that some form of neuromuscular dysfunction may underlie CFS, an understanding that might also help us understand the connections between hypotension, tachycardia and nerve sensitivity. Rich Violand demonstrates the straight leg raise on a volunteer.

When Nerves Get “Stuck”

The research stems from the observation that some people with CFS have restrictions in their normal range of movement, i.e., they can’t lift or stretch their legs and arms as well as those without the condition. In addition, the classic CFS symptoms (fatigue, cognitive fogginess, lightheadedness, etc.) often seemed to get worse after a physical therapy evaluation that strains muscles and nerves. Even raising the leg of someone who has this subtype of CFS can make symptoms worse, sometimes for up to 24 hours.

Dr. Rowe and his team suspect that these movement restrictions are related to problems with abnormal tension or tightness within the nerves and soft tissues. Nerves need to be free to slide over and between the muscles and other soft tissues they branch through. But sometimes they lose this mobility and come under increased mechanical tension, leading to abnormal pulling that makes the nerve hypersensitive. In response to that sensitivity, muscles along the nerve highway tighten to “protect” the nerve from further irritation. The tight muscles, in turn, further restrict movement.

This persistent muscle tightness in response to the tightness and lack of glide in the nerves may contribute to the fatigue that is so prevalent in CFS, Dr. Rowe explains. It may also explain why certain movements and postures can place increased strain on nerves and muscles, worsening symptoms. It may also affect the autonomic nervous system which, in turn, controls blood pressure and heart rate. 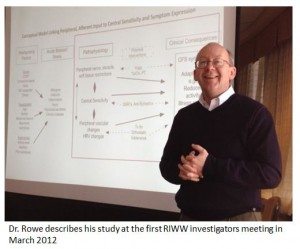 “Our study is an attempt to see if that kind of nerve and muscle strain loads the nervous system in such as a way as to increase its sensitivity so it then ‘over-responds’ to various stresses,” he said. If the group can firmly establish that physical problems in range of motion and nerve glide interact to increase CFS symptoms, “that would suggest new ways to treat people with physical therapy techniques that haven’t been emphasized in the past,” he said. These include gentle manual techniques to reduce muscle spasm and tightness, improve soft tissue range of motion, reduce tension in the nerves and surrounding soft tissues, and, using a technique called neural mobilization, improve the ability of nerves to “glide” through muscles and soft tissue.

It seems to work in many patients, he says. Once their peripheral nervous system strain is reduced with physical therapy, often they report less dizziness and lightheadedness. Even the adolescents he treats, who “are almost never willing to wear compression stockings,” almost always stick with physical therapy because it makes them feel so much better.

“I feel like we’re further ahead clinically than we are from a research perspective,” he admits. But then, he notes, trying to figure out why something works in the real world is often what drives the research. 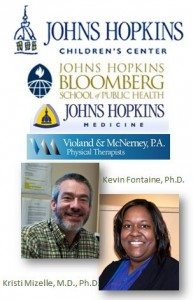 Dr. Rowe’s study will enroll 60 people with CFS and 20 healthy people as controls. Each group will be randomly assigned to either a 15-minute passive straight leg raise or a “sham” neuromuscular strain. Then the researchers will assess whether the CFS group experiences any change in symptoms, pain sensitivity or sympathetic nervous system tone after the straight leg raise and 24 hours later.

Identifying a new biomarker (neuromuscular strain) that could be used to diagnose and classify CFS patients, as well provide a target for treatment. It would also raise other questions for investigation, such as: “Does the severity of the neuromuscular strain correlate with the severity of CFS and symptoms?” “Are there differences in gene expression in response to the strain?” And, of course, “What is the best way to treat these neuromuscular dysfunctions?”