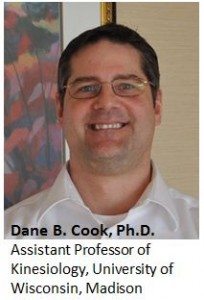 Most experts agree that avoiding physical activity can compound ME/CFS symptoms, yet exercise is also the very thing that can make symptoms worse! This catch-22 situation even has a name: “post-exertion malaise” (PEM), or post-exertion relapse, and it is considered one of the most debilitating aspects of ME/CFS. It occurs not just with physical activity; mental exertion and any kind of stress can provoke a relapse of the classic flu-like symptoms of ME/CFS, negatively impacting thinking and memory, and sleep for days or even weeks.

Yet no single research group has ever evaluated the effects of mental and/or physical stress on PEM in a multi-systemic manner, notes Dane B. Cook, Ph.D., an assistant professor of kinesiology at the University of Wisconsin in Madison. Now, thanks to a grant from the CFIDS Association, he and his team plan to do just that.

“The overarching theme is to understand the pathophysiology (or underlying processes) of PEM in CFS,” he says, including connections between the immune system, the brain, and behavioral outcomes such as fatigue. “This is a first step towards a more comprehensive understanding of PEM.”

Current research on PEM is inconsistent and confusing, says Dr. Cook. It’s not even clear how much activity leads to PEM, or how long after the stressor PEM occurs. For instance, his group has performed maximum exercise tests in people with ME/CFS and didn’t see any changes in symptoms until five days later, which may or may not have been related to the stressor. However, others have worked with participants in whom moderate exercise for 30 minutes increased symptoms 30 minutes to two days afterwards. Studies also use varying definitions and intensities of exercise, leading to significant variability in our understanding of PEM, he said.

Dr. Cook takes a psychobiological approach to the study of PEM, looking for objective markers that could trigger symptoms, He then uses exercise as a model to identify the effects of physical activity and other stressors on people with ME/CFS. “That’s important, he notes, because you can’t begin to fix a problem like PEM until you can understand its underlying cause. 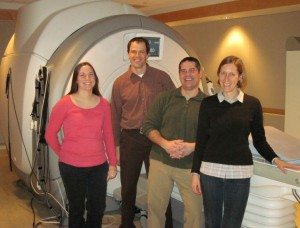 Dr. Cook’s grant is unique in that it is designed to bring disparate research into a comprehensive whole.

The first piece of the puzzle comes from his own work using a special MRI that tracks oxygen uptake throughout the brain to identify brain function changes in ME/CFS patients after they complete a fatiguing cognitive task such as repeatedly subtracting 7 from a starting number. He’s found significant differences in brain function of those with ME/CFS and those without after such stressors, although there are no differences in brain function between the two groups without inducing mental fatigue.

The second piece of the puzzle comes from previous CFIDS Association grantee Kathleen Light, Ph.D., her husband Alan Light, Ph.D., and their team at the University of Utah. They identified unique post-exercise gene expression markers that can be used to differentiate people with ME/CFS from those without and from those with multiple sclerosis and fibromyalgia. They also discovered increased expression of sensory and immune system genes after exercise.

The third piece of the puzzle is provided by another past CFIDS Association grantee, Gordon Broderick, Ph.D., of the University of Alberta in Canada. He used his previous grant to advance his work in identifying evidence of persistent immune activation after Epstein-Barr virus infection, which is thought to trigger ME/CFS. 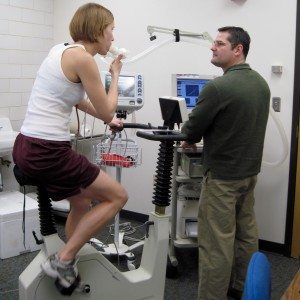 Dr. Cook monitors a volunteer as she performs the exercise challenge.

Together, the three groups will hopefully be able to begin to piece together the puzzle and create a clear picture of PEM, says Dr. Cook. “This grant is the outcome of many years of talking to other scientists about ME/CFS and merging that information with other important findings,” he said. “It is really and truly an interdisciplinary project.”

The study has three principle components:

An important component of the study is the use of sophisticated mathematical modeling to integrate the disparate information that comes in from the different biologic systems (nervous system, blood, genes) to identify patterns and connections. The result, says Dr. Cook, is that “we can see systems ‘communicate’ (in the statistical sense) with one another and how that ‘communication’ changes when you introduce a stressor such as exercise.” If successful, he notes, the study will provide preliminary data to guide future large-scale studies targeting specific subtypes of ME/CFS, determining the impact of PEM and identify potential targets for treatment.

This study involves 15 women with ME/CFS who will be evaluated over three days.