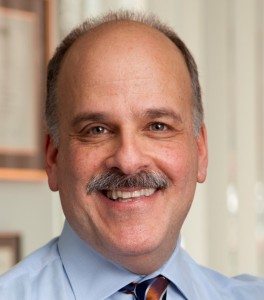 Many of us experience some slight dizziness when we quickly stand from a sitting or lying position. Now multiply that feeling by 10, add “brain fog” and, possibly, vision loss or fainting to the symptoms, and picture it lasting for minutes or longer. Now you can begin to understand what many people with ME/CFS experience.

Marvin S. Medow, Ph.D., professor of pediatrics and physiology and associate director for the Center for Hypotension at New York Medical College (NYMC) in Valhalla, has devoted the past several years to studying postural tachycardia syndrome (POTS), a condition that, among other things, can result in reduced blood flow to the brain (cerebral blood flow).

Reduced brain blood flow can lead to dizziness, lightheadedness, and, sometimes, loss of consciousness. It can occur when getting up rapidly because blood pools in the abdomen and legs due to gravity if something interrupts the normal mechanisms that help return blood back up to the heart and brain. This can cause dizziness, forcing you to lie down, which enables blood to return to the brain.

A few years ago, Dr. Medow and the director of the NYMC Center for Hypotension, Julian M. Stewart, M.D., Ph.D., realized that many of the people they saw with POTS also had ME/CFS. Today, we know that the conditions co-exist in up to 80 percent of those with ME/CFS. Thus, much of the Center’s research focuses on studying these two entities. To date, Dr. Stewart has received more than $5 million in National Institutes of Health grants to support this work.

With a previous CFIDS Association grant, Dr. Medow, working with Dr. Stewart and others, showed that subjecting someone with ME/CFS to an orthostatic challenge (placing them on a “tilt table” and tilting the table from a horizontal to a vertical position), led to problems with memory, concentration and information processing, as well as reduced cerebral blood flow. This grant takes that research a step further—testing interventions to see if they can improve the tilt-induced brain fog in people with ME/CFS and using the results to identify ME/CFS subtypes. 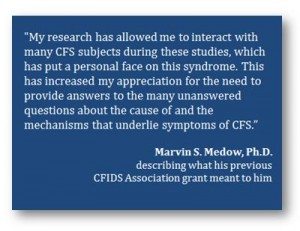 One of the most troublesome symptoms in people with ME/CFS is “brain fog,” which manifests as impaired working memory and concentration accompanied by difficulty processing complex information. As Dr. Medow showed in his previous work, the greater the orthostatic stress and the harder the mental challenges during neurocognitive testing, the worse the results of cognitive testing.

In addition, some of those with ME/CFS and orthostasis also experience very rapid, deep breathing during an orthostatic challenge, like trying to catch your breath after strenuous exercise. This hyperventilation, in turn, leads to reduced carbon dioxide (CO2) levels, or hyperpnea, affecting the pH of the body. And, guess what? “One of the most powerful modulators of brain blood flow happens to be CO2,” Dr. Medow said. “The lower the CO2, the lower the cerebral blood flow.”

Dr. Medow’s hypothesis: that the reduced cerebral blood flow and brain fog occurs, at least in part, because of impaired control mechanisms for regulating C02 and/or blood pressure.

Thus, he said, in the study he will “tweak” the physiologic system to see if changing blood pressure using drugs during the orthostatic challenge, adding CO2 to room air, or increasing blood flow to the brain using drugs can improve symptoms and neurocognitive ability.

These interventions “may not be therapeutic,” Dr. Medow said, “but they may suggest mechanisms leading to the dysfunction that could be addressed by some form of therapy.” One other goal: identify ME/CFS subtypes, an important objective of the CFIDS Association. Using objective biomarkers like low blood CO2 levels to identify ME/CFS subtypes may help clarify some of the confusion around disease given the heterogeneity seen among patients. More clearly defined subtypes helps target new therapies and may make existing therapeutic approaches more effective. 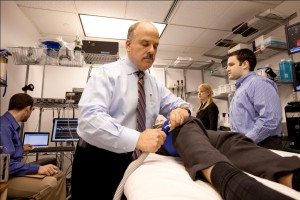 The researchers will obtain baseline measures with a tilt table challenge during which they measure cerebral blood flow and cognitive abilities.

Then they will test three interventions during three follow-up visits:

During each challenge, the researchers will collect a variety of data, including cerebral blood flow, blood pressure, heart rate and rhythm, breathing rate and volume and amount of C02 in each participant’s breath. They will also test cognitive function using the “N-back tests,” which evaluates working memory, concentration, attention, and information processing with progressively increasing levels of mental stress.