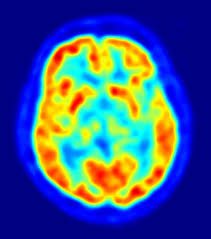 Neuroimaging has been used to study the structural, functional and metabolic affects of ME/CFS on the brain in ME/CFS patients for the past 25 years.  To date there are about 50 papers in the peer-reviewed biomedical literature describing these findings.  Even at this time, the neuroimaging findings when examined in the context of the patients symptoms implicated inflammation as the culprit.

The brain was long thought to be immune privileged, which means it is an organ that is relatively free from or only experiences limited inflammation.  We now know that the brain has dynamic two-way communication with the peripheral immune system and that there are immune cells that reside in the brain.  These brain immune cells are called microglia – a specialized immune cell known as a macrophage.  Think of macrophages and microglia as the “Pac Man” of the immune system – gobbling up damaged cells and infectious agents. Microglia are important to keeping the central nervous system environment free from inflammation and in a healthy state.  But too much microglia activity over long periods of time causes inflammation – known as neuroinflammation – and this is detrimental to the brain.

This month we highlight three publications that both directly demonstrate and implicate neuroinflammation in ME/CFS.

Dr. Andrew Miller, Emory University and investigators from the Centers for Disease Control and Prevention published the results of a functional neuroimaging study conducted on CFS patients and healthy controls identified from the longitudinal survey of CFS in Georgia.  The investigators focused on the basal ganglia, a region of the brain important for motor activity and fatigue and used a gambling task to activate the basal ganglia.   Compared to healthy controls, CFS patients had reduced basal ganglia activation during the gambling task suggesting possible alterations to dopamine (a nerve signaling molecule) transmission.  The authors cited studies from other diseases including Parkinson’s disease and HIV where inflammation affects the function of the basal ganglia and conclude that since inflammation has been demonstrated in CFS, (peripheral) inflammation may affect basal ganglia function and causing CFS symptoms. While this study only compared CFS patients to healthy controls, it is important to note how other diseases with symptoms similar to CFS are informing these results. http://www.ncbi.nlm.nih.gov/pubmed/24858857

In a study that has received widespread media attention and was published in the top nuclear medicine journal worldwide, the team at RIKEN Center for Life Science Technologies led by Professor Yasuyoshi Watanabe used neuroimaging to show widespread neuroinflammation in ME/CFS.  The investigators showed that microglia cells were activated in several regions of the brain in ME/CFS patients compared to healthy controls.  Specific regions of neuroinflammation correlated with ME/CFS symptom severity.  While microglia activation and neuroinflammation is not specific to ME/CFS, it is an important objective indicator that helps further our understanding of ME/CFS pathophysiology. http://www.ncbi.nlm.nih.gov/pubmed/24665088

The Solve ME/CFS Initiative funded Dr. Dikoma Shungu, Weill Cornell Medical College to use neuroimaging to examine metabolic differences in the brain.  In the elegant studies conducted by Shungu and his team, brain metabolism in ME/CFS patients was compared to healthy controls and “’disease” controls.  Disease controls are individuals with a disease that presents with similar clinical symptoms as ME/CFS and in Shungu’s studies he used individuals with general anxiety disorder (GAD) and major depressive disorder (MDD) as disease control groups.  Levels of lactate were higher in the ventricular space of the brain (the space that is filled with fluid) in ME/CFS, GAD and MDD compared to controls.  Lactate levels were highest in the ME/CFS and MDD subjects.  Lactate suggests a metabolic defect and the levels of lactate correlated with fatigue severity.  Shungu and his team determined that glutathione, the main antioxidant in the brain, was significantly decreased in ME/CFS and MDD patients.  Increased levels of ventricular lactate and decreased glutathione were significantly associated with function and disability. Shungu describes how these findings support a role of increased oxidative stress in ME/CFS.  http://www.ncbi.nlm.nih.gov/pubmed/22281935

FDA: The Voice of the Patient

SolveCFS BioBank: Breaking Down Barriers Through Biomarker Discovery, Part 3 of 4