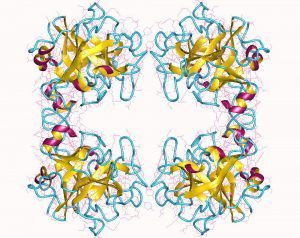 We recently highlighted a paper published online on October 17, 2016 (doi: 10.1038/ng.3696)   the journal Nature Genetics, one of the most rigorous publications in the field of genetics with tantalizing findings. The paper, titled “Elevated basal serum tryptase identifies a multisystem disorder associated with increased TPSAB1 copy number,” had two key features that could be potentially relevant to ME/CFS:

Of note, tryptase is an enzyme that is secreted (alongside histamine) from mast cells, which are key immune cells essential in allergic response that are found throughout the body, including in skin cells, lungs, intestines, air passages, and bone marrow. Cases of dysregulated and chronic mast cell activation (known as mastocytosis) can be slow progressing or aggressive, and mastocytosis can cause organ system failure. Leukemia has also been reported in some cases. This study dubbed the symptom complex as hereditary alpha-tryptasemia syndrome. Whether ME/CFS is associated with tryptasemia remains to be seen, but it’s worthy of a serious investigation. We give this paper a thumbs up.