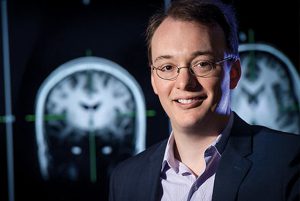 The study from Dr. Jarred Younger of the University of Alabama at Birmingham is entitled “Advanced Non-Invasive Analysis in ME/CFS Diagnosis and Treatment Decisions.” This study will use a magnetic resonance spectroscopic thermometry (MRSt) technique to assess absolute temperature across the entire brain. This technique allows researchers to investigate the pathophysiology (in other words, the functional changes that accompany the disease), of myalgic encephalomyelitis/chronic fatigue syndrome (ME/CFS).

Defining the pathophysiology of ME/CFS is vital to the development of effective treatments.

Dr. Younger theorizes that ME/CFS results from “low-level inflammation in the brain” and that chronic activation of certain connective tissues “provokes the release of proinflammatory agents that interact with neurons to cause symptoms of fatigue, pain sensitivity, and cognitive and mood disruption.” He continues that “MRSt may be able to detect that neuroinflammation by detecting the increased metabolic demand created by activated immune cells that overwhelm the cooling effect of the circulating blood.” If his theory proves to be true, neuroinflammation may be observed as a discrepancy between brain and core body temperatures.

For his preliminary study, Dr. Younger will examine 20 women with ME/CFS and 20 age-matched healthy controls. Their temperatures will then be assessed throughout the entire brain, yielding approximately 500 assessments of brain temperature.

Five distinct hypotheses will be tested:

1) The average whole-brain temperature of the ME/CFS group will be significantly higher than that of the control group.

2) The brain-body temperature dissociation (brain temperature minus core temperature) will be significantly greater in the ME/CFS group than in the control group.

3) Across the entire brain, ME/CFS individuals will show greater temperature variance than will controls, indicating areas of abnormal temperature elevation.

4) On whole-brain temperature maps, ME/CFS individuals will show discrete areas of temperature elevation in areas associated with fatigue and malaise.

5) In the ME/CFS group, severity of fatigue will be correlated with higher whole-brain temperature.

If these hypotheses are confirmed, this experiment will create an objective test of ME/CFS pathology that will indicate the presence of neuroinflammation. This test would become the first completely non-invasive tool for detecting neuroinflammation and would allow for safe and inexpensive longitudinal testing that can’t be accomplished with a PET scan.

This study will also gather the first whole-brain metabolic data in ME/CFS, which will be made available to other researchers for secondary analyses.

We hope this non-invasive scanning technique will aid in ME/CFS diagnosis the development of new ME/CFS treatments.