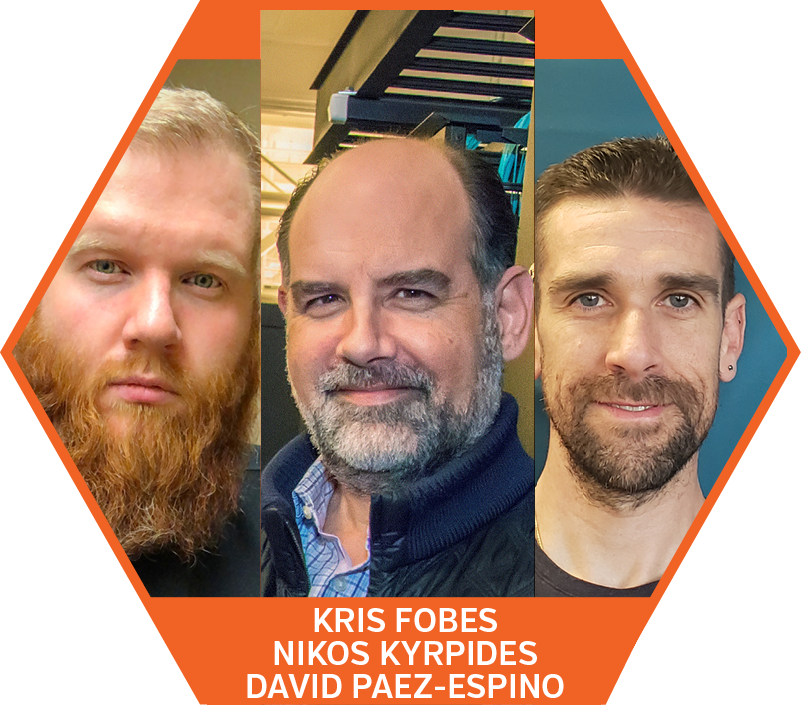 Nikos Kyrpides, PhD, David Paez-Espino, PhD, microbiome data scientists from the DOE Joint Genome Institute and the Lawrence Berkeley National Laboratory, and GeneSavvy’s Kris Fobes will begin a collaborative project to examine known and novel organisms in ME/CFS blood and cerebrospinal fluid. The Project will be coordinated by Amy Proal at Autoimmunity Research Foundation and will link with current Alzheimer’s research at Harvard University that is shedding light on how persistent pathogens in human brain tissue can drive neuroinflammatory symptoms. Studies of the microbiome in ME/CFS have primarily focused on bacteria in the gut. So, this study of the entire microbiome, including viral (human and phage), bacterial, archaea and other microorganisms, could open new frontiers in the study of ME/CFS.

“We are living in exciting times! New big data-based approaches and computer programs (like the tools and microbial databases generated by the DOE that we will use for our Project) are allowing scientists to identify thousands of viruses, bacteria and other organisms across all of Earth habitats. These include human body sites previously assumed to be sterile. We are very excited to join forces to better explore these vast human microbiome/virome ecosystems and their connection to the environment in patients with ME/CFS. We hope that our analysis of both known and novel organisms in ME/CFS blood and cerebrospinal fluid might shed light on root cause drivers of the disease. We will work with urgency and transparency since we fully understand the devastating toll that ME/CFS takes on patients, caregivers and their communities.”  – The Kyrpides/Paez-Espino/Fobes Team

Check out an interview of Dr. David Paez-Espino by Dr. Amy Proal here

The illness ME/CFS is tied to the activity of infectious agents such as Epstein Barr Virus, other herpesviruses and a range of bacterial pathogens. Novel computer-based technologies now allow these and other ME/CFS-associated pathogens to be studied as interacting members of human microbiome + virome communities. Humans harbor these vast ecosystems of bacteria, viruses and other microorganisms in nearly all tissue and blood. A growing number of well-studied chronic inflammatory conditions including neurodegenerative diseases and cancers are characterized by dysbiosis or imbalance of these microbial + viral communities in various body sites. These include Alzheimer’s disease, in which neuroinflammation associated with the condition is increasingly tied the collective activity of infectious agents in blood and the central nervous system. It follows that while gut microbiome + virome dysbiosis are actively being studied in ME/CFS, microbial and viral communities in blood and/or cerebrospinal fluid (CSF) may also contribute to the illness. Indeed, several research teams have reported early evidence of neuroinflammation in the ME/CFS brain.

Our Collaborative Project brings Nikos Kyrpides + David Paez-Espino at the Berkeley University DOE Joint Genome Institute and Kris Fobes at GeneSavvy into the study of ME/CFS. Our goal is to use very specific, cutting-edge computer-based tools and algorithms to identify communities of bacteria and viruses capable of persisting in the blood + CSF of patients with ME/CFS. Kyrpides and team are running the “Uncovering the Earth’s Virome Project” and have helped create and conceptualize IMG/VR – the world’s largest and most diverse existing viral database. Their existing technological setup can subsequently identify both known and novel bacteria, archea, dsDNA viruses, ssDNA viruses, dsRNA viruses, ssRNA viruses, retroviruses, bacteriophages, and specific viral groups (including mycoviruses, giant viruses, and virophages) in a single analysis. If such organisms are identified in a given sample, we will use additional computer-based approaches and software programs to predict interactions among the different organisms – including linking identified bacteriophages to their specific bacterial hosts. This ability to infer the community dynamics of microbiome and/or virome communities can shed light on the activity of pathogens that often act together to drive inflammatory disease processes.

We will compare organisms identified in our ME/CFS samples to those in similar samples obtained from patients with several other neuroinflammatory conditions. This comparison could reveal common trends between the different diseases. We have also deliberately positioned our project as pilot study that could solidify our technology pipeline for use by other ME/CFS research teams who want to identify both known and novel organisms in their human samples.

Our ability to identify novel organisms in human samples is very important. It is currently estimated that only 2% of the human virome has been characterized and named. Indeed, the “Uncovering the Earth’s Virome Project” is progressing at such a rapid pace that viral diversity in the IMG/VR database has more than tripled since August 2016. We can subsequently test the possibility that novel, as-yet unidentified viruses may contribute to the ME/CFS disease process. These include bacteriophages, which modulate activity of the bacterial microbiome, interact with the mammalian immune system and have been shown capable of pathogenic activity