Why Has ME/CFS Progress Been So Slow? 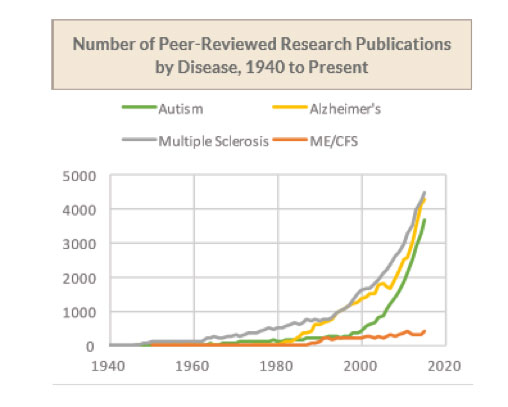 ME/CFS is only beginning to be recognized by medical communities in the US and Europe as an urgent health crisis. There is no conclusive diagnostic test or biomarker for ME/CFS. Given the lack of understanding of the cause of the disease, the lack of federal and pharmaceutical investment, the lack of FDA-approved drugs, and that no cure for ME/CFS has been identified, treatment is now only directed at relieving symptoms. 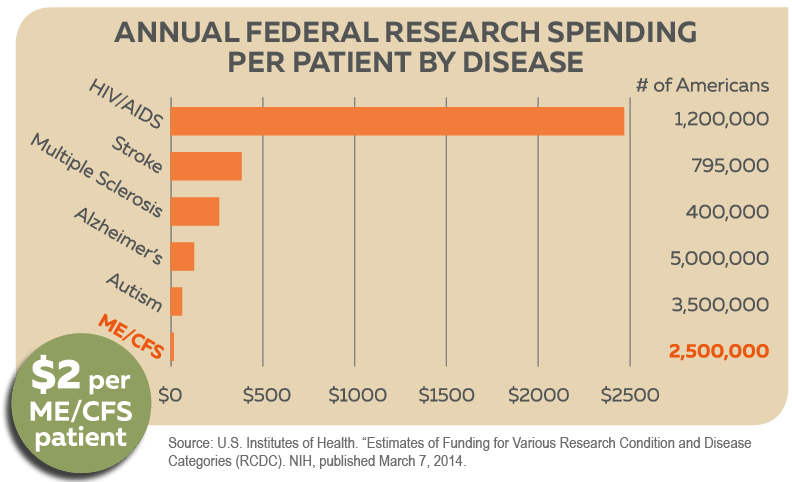 The National Institutes of Health (NIH) publishes a list annually showing its spending on various diseases. In 2015, the ME/CFS research budget, ranked in order by research dollars, was 249 out of 265 diseases funded—almost at the very bottom. In actual dollars, government spending on ME/CFS is less than is spent on hay fever. To really make headway in a timely manner toward making ME/CFS understood, diagnosable, and treatable, we need more government funding.

ME/CFS faces difficult stigma, like many “invisible” illnesses. For many years, ME/CFS was mislabeled as a psychological or psychosomatic ailment and studies were conducted under this incorrect supposition which continue to damage the community to this day.

In 2011, results were published for a five-year study conducted to determine what therapies, if any, are effective in treating ME. The PACE trial concluded that graded exercise therapy (GET) and cognitive behavioral therapy (CBT) were effective treatments (in other words, the trial concluded that the disease is psychological—rather than physiological—in nature). Almost immediately, ME patients were concerned about the validity of the study methodology and requested additional information. A multi-year legal battle ensued, involving prominent UK institutions. Patients were concerned not only that the study protocols were not sound, but that the results could be harmful to patients. Ultimately, the patients prevailed and the information revealed demonstrated that the PACE trial’s ostensibly positive results were diminished by two-thirds.

ME/CFS has very clear and proven biological (not psychological) traits, which include the following (as well as dozens of other measurable traits):

To learn more about the PACE trial, visit the extensive and award-wining coverage of Dr. David Tuller at: http://www.virology.ws/mecfs/

Can you help me find a doctor?

As we are a research and advocacy organization, we unfortunately don’t have the resources to maintain lists of doctors who are familiar with ME/CFS or provide patient services. We also are unable to make recommendations for individual medical services. You can find other medical provider lists at:

American ME and CFS Society (AAMES)

We can’t make any assurance about how current or accurate lists are and we are unable to endorse or recommend the providers or treatments listed.

Have another question? E-mail us anytime at SolveCFS@SolveCFS.org