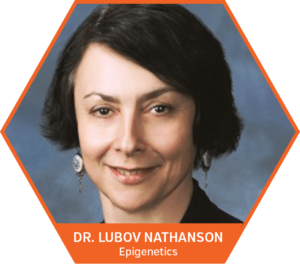 Dr. Lubov Nathanson (PhD), an Assistant Professor and Research Scientist at Nova Southeastern University, is lead investigator on a project exploring altered genetic expression in the immune cells of ME/CFS patients. In a previous study, Dr. Nathanson and research collaborators used a mix of immune cells (peripheral blood mononuclear cells (PBMC)) to evaluate the potential role of DNA methylation, an epigenetic process that can turn genes on or off, in ME/CFS. The study showed differences in DNA methylation between ME/CFS and control samples, supporting the hypothesis that epigenetics could be contributing to the disease. Working with co-Investigators Malav Trivedi (PhD), Elisa Oltra (PhD), and Vladimir Beljanski (PhD), Dr. Nathanson will build on the earlier findings of epigenetic alterations by evaluating subtypes of immune cells to determine the impact of this mechanism on each cell population.

Patients with ME/CFS (myalgic encephalomyelitis/chronic fatigue syndrome) Myalgic Encephalomyelitis/Chronic Fatigue Syndrome/ (ME/CFS) is a complex disease that is associated with a variety of symptoms including fatigue, headache, memory problems, muscle and joint pain, gastrointestinal issues, neurological problems, hormonal imbalance and immune dysfunction. Currently, treatment relies solely on symptom management but does not address the underlying mechanisms of disease. Our previous research efforts have shown that regulation of gene expression altered the phenotypic nature of ME/CFS. While it is important to know what specific genes change their expression in the onset and progression of ME/CFS, it is equally important to understand why these genes change their expression. Therefore, on a level of DNA, we want to understand how the changes in the DNA structure (specifically, methylation of DNA) can lead to the onset and progression of ME/CFS as well as potentially alter specific mechanisms that are vital for cell survival, function and immune defense. Our recent genomic study used DNA methylation assays of the whole peripheral mononuclear blood cells (PBMC) to evaluate the changes in epigenetic regulation of gene expression in PBMCs of ME/CFS patients. Samples were compared with carefully matched group (by sex, age and BMI) of healthy controls (HC). Analysis of DNA methylation revealed an increased abundance of hypo-methylated promoters of genes related to the immune functions, cell growth, autophagy, and signaling activity in the whole PBMC samples of ME/CFS patients. These results show the importance of the DNA methylation in the regulation of the changes in gene expression in ME/CFS.

However, this research (as well as vast majority of research in ME/CFS) was done on the whole population of PBMC which is a mixture of immune cells with various functions that are implicated to varying degrees in diseases (such as ME/CFS) involving immune-dysfunction. It is known that proportions and functions of the different immune cells populations change in ME/CFS. Thus, it is important to compare epigenetic characteristics of the same cell types. The main goal of this study is to determine changes in the epigenetic regulation in each of the six main subtypes of immune cells caused by ME/CFS: helper T cells, cytotoxic T cells, B cells, NK cells, dendritic cells and monocytes in order to determine, how each cell population is affected by the disease.

This study will provide further insight into mechanisms of ME/CFS onset, activity and progression as well as specific cell to cell variation in the immune system. We will also identify novel pathways specific for the cell subtypes that can be used to target diagnosis and treatment more effectively, addressing the underlying cause of disease.