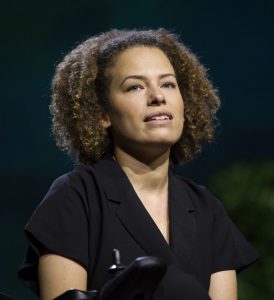 Jen Brea’s much-anticipated TED Talk, “What happens when you have a disease doctors can’t diagnose,” discussing the stigmatization of hard-to-understand diseases went live on January 17. Since its release, it has received over 394,000 views, giving ME/CFS excellent exposure to the public at large and likely introducing it to many individuals who had not previously heard of the disease. If you haven’t yet watched Jen’s TED Talk, be sure to watch it here.

Also this month, Jen Brea’s documentary film, Unrest, premiered in the documentary competition at the Sundance Film Festival. Head of the Salt Lake City-based Bateman Horne Clinic and SMCI Research Advisory Council member Dr. Cindy Bateman arranged a private film screening for those whose lives have been touched by ME/CFS. Unrest won’t be made available to the public until it goes through the circuit of film festivals and finds a distributor, but we are rooting for this film to obtain broad distribution so that many more people will come to understand the devastation of this disease.

FM AS A SPECTRUM DISORDER