On March 25, the Solve ME/CFS Initiative hosted a briefing in Washington, D.C., on the Institute of Medicine’s report on myalgic encephalomyelitis/Chronic Fatigue Syndrome.

The briefing gathered congressional representatives, reporters, government officials and researchers in the ninth-floor rotunda at 101 Constitution Ave. More than 300 also viewed the event through a live webcast, which can be viewed on the Solve ME/CFS YouTube channel. Mary Sue Perpich, daughter of the late Gov. Rudy Perpich, helped to organize the event.

Dr. Clayton began her presentation with some background on the landmark report and the unanimity the committee members experienced over the 18-month period. “It really was an amazing, dynamic process,” said Clayton, who has chaired or co-chaired five other IOM committees. After providing an overview of the report’s key recommendations, she offered her own thoughts about the next steps that need to be taken now that the committee’s work is done.

“It is my sincere hope that people will use this report, which clearly demonstrates the seriousness of this illness for advocacy with policy makers,” she said. “It is time to fund more research into this disease’s causes, defining subtypes and effective treatments. This will require stronger advocacy in—and outside—the government.”

Clayton added: “We opened the door. The challenge now is to go through that door.”

In her remarks, Solve ME/CFS president Carol Head made a forceful case for the need for dramatically more government funding for the disease. Through a series of slides, Head demonstrated that the funding for ME/CFS ranked 232 of the 242 National Institutes of Health spending categories in 2014.

“In actual dollars, the spending on ME/CFS is less than what our government spends on hay fever,” Head said. She also showed that, given the prevalence of ME/CFS, the NIH funding is a mere $5 per patient, compared with, say, $255 per multiple sclerosis patient and $2,482 per HIV/AIDS patient.

Given the disparity of federal funding, as well as the $17 to $24 billion dollar economic burden on the country from ME/CFS, Head called for three things to take place: 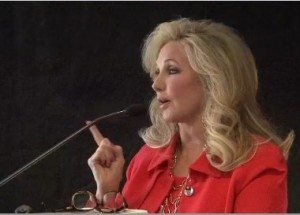 Fairchild explained that she had always been interested in science and research and had read a fair amount about ME/CFS in the 1980s. In 1989, after returning to L.A. from a movie shoot in Portland where it had been cold and rainy, she went to see her doctor who told her she tested positive for Epstein-Barr virus. “Suddenly, CFS wasn’t just a fascinating case study; I was one of the cases,” she said. While Fairchild didn’t suffer from fatigue at the time of diagnosis, she says, “When it hit me, it hit me like a ton of bricks.”

She was fortunate on a number of fronts: She had a mild case, she was diagnosed early, and she had a doctor who didn’t think she was “nuts.”

Fairchild said she learned how to pace herself and save herself for her work, which was manageable since movies require work in spurts with long down times in between, when she could rest. While the brain fog made it harder to learn her lines—something that had always come easily to her—she “was able to muddle through and keep making a living.” She knows this is not the case for most ME/CFS patients.

Fairchild says she’s committed to making the path easier for others.

“Real pain and devastation exist because of this disease,” she told the in-person and webcast audiences. “We need the powers that be to give us focus and funding because, honey, the science ain’t free.”

The CFIDS Association Statement on the H.H.S. IOM Contract

Going the Extra Mile for ME/CFS