In April, Dr. Baldwin worked with our Scientific Director, Suzanne D. Vernon, PhD to provide comment on post-exertional debility to the Institute of Medicine Committee on Diagnostic Criteria for ME/CFS. The Association has been working with Dr. Larry Baldwin, tapping into his medical expertise and experience as a patient.

We are happy to provide his insights here as a guest blog post, as he talks about post-exertional malaise (PEM) as Post-Exertional Debility (PED).

Post-Exertional Debility is an Important Symptom during Myalgic Encephalomyelitis
By Larry Baldwin, M.D.

I have pursued a variety of research interests such as: synthesis of an organic molecule designed to release nitrogen gas as a preservative, health care delivery issues at the Johns Hopkins Hospital Pediatrics ER and at the rural medical clinic in Onamia, MN, health care policy concerning the competitive environment for the teaching hospitals in the Twin Cities Metro area, and the early use of thrombolytics in acute lower limb venous occlusion to prevent chronic venous disease. So I was interested in using my research observation skills to study my own ME/CFS symptoms and have kept a record through the years.

From this record I see a pattern of symptoms, which I call post-exertional debility (PED), that occur following physical or cognitive exertion. This pattern is specific and vastly different from any post-exertional experience I had as an athlete, surgery resident or while practicing surgery. While training for marathons I was able to run through the “wall” that many runners experience. Now I experience a similar wall after minimal exertion and have not been able to train through or push through this wall.

This pattern of post-exertional symptoms has been very consistent while experiencing them almost daily during 20 years of disease. The onset and peak severity of symptoms is characteristically delayed following exertion. The symptom severity increases as the workload intensity and duration increases. Some symptoms appear only as the workload increases. This symptom pattern is different from that during an acute viral infection.

The following table shows how symptom severity increases and symptoms appear as workload increases. Workload may be physical or cognitive. The lowest level of workload will elicit migraine pain, fatigue sensation, cognate impairment and sleep onset prolongation. As the workload increases these symptoms increase in severity. At the next higher level of workload sleep abnormalities worsen with nocturnal myoclonus beginning and then worsening as workload increases. This has been severe enough, on occasion, to cause me to fall out of bed. Mild workload will not cause noticeable neutrally mediated hypotension, but at higher levels it occurs typically after a few hours of sleep at night. As the workload increases the hypotension is more severe, lasts longer and spreads into the daytime hours with greater interventions needed to treat it. 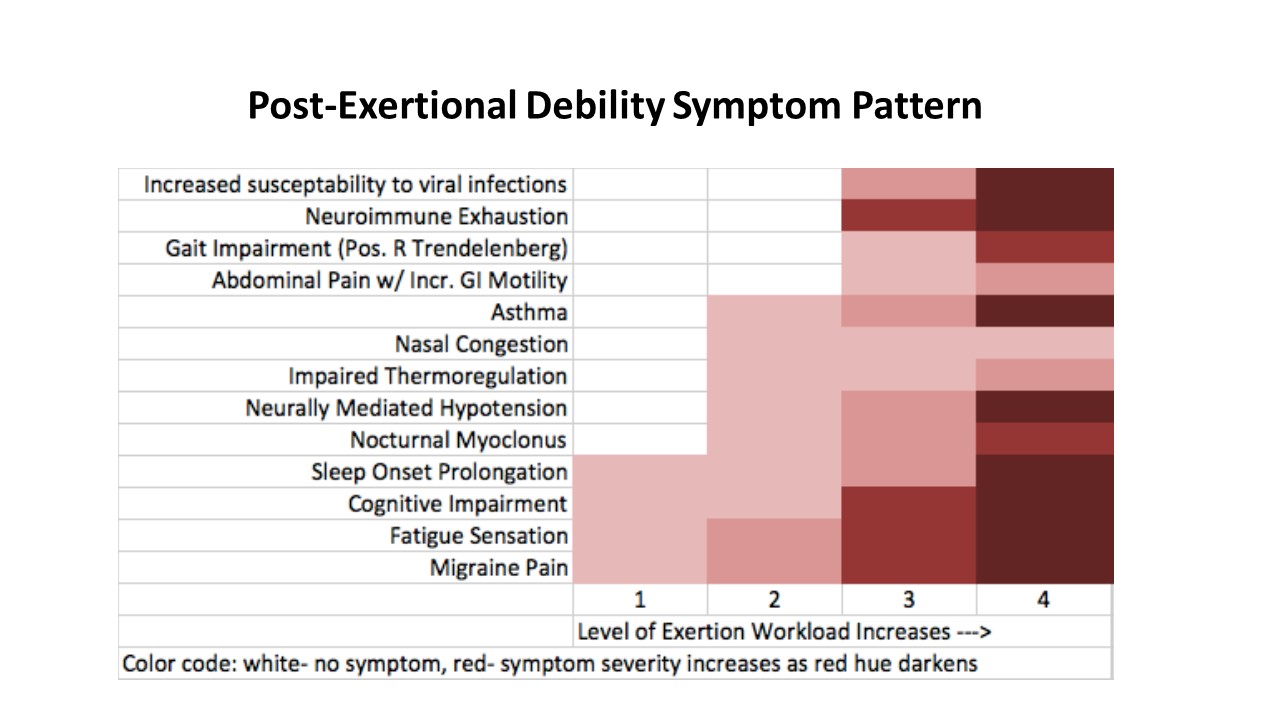 Earlier in the course of the disease, salt tablets, midodrine, mestinon, florinef and approximately 4 liters of water per day were needed either singularly or in various combinations to treat hypotension problems.  With weight lifting for muscle development and presumably some degree of atherosclerosis now only water is needed to maintain blood pressure. Thermoregulation and nasal congestion seem clearly linked to exertion with some change in severity with change in workload intensity but the gradations are more difficult to notice. Asthma is correlated to workload changes but it takes a certain amount of work before it appears. Even more workload is needed before gait impairment occurs but when it appears it is either a distinct limp with a positive right Trendelenburg sign due to muscle weakness (when standing on only the right foot, the pelvis tilts downward on the left side) or severe enough where I am unable to walk until I rest recumbent for about an hour after which gait is much improved.

Neuroimmune exhaustion is a very severe form of PED occurring only after prolonged physical exertion at high workload intensity, such as driving a machine 4 hours a day for three days consecutively. This can occur after prolonged cognitive exertion as well, typically 5 to 7 days of concentrated cognitive work for two to four hours a day recently although I could work longer before this happened earlier in the disease. If rest does not occur when exhausted, then viral infection certainly occurs and this can lead to bacterial infection such as pneumonia if I continue exertion. This occurred a couple times before I learned this sequence. I was impressed that exertion can cause such significant immunosuppression.

The following radar chart takes each symptom and compares the typical maximum symptom severity that occurs during post-exertional debility versus during an acute viral illness. 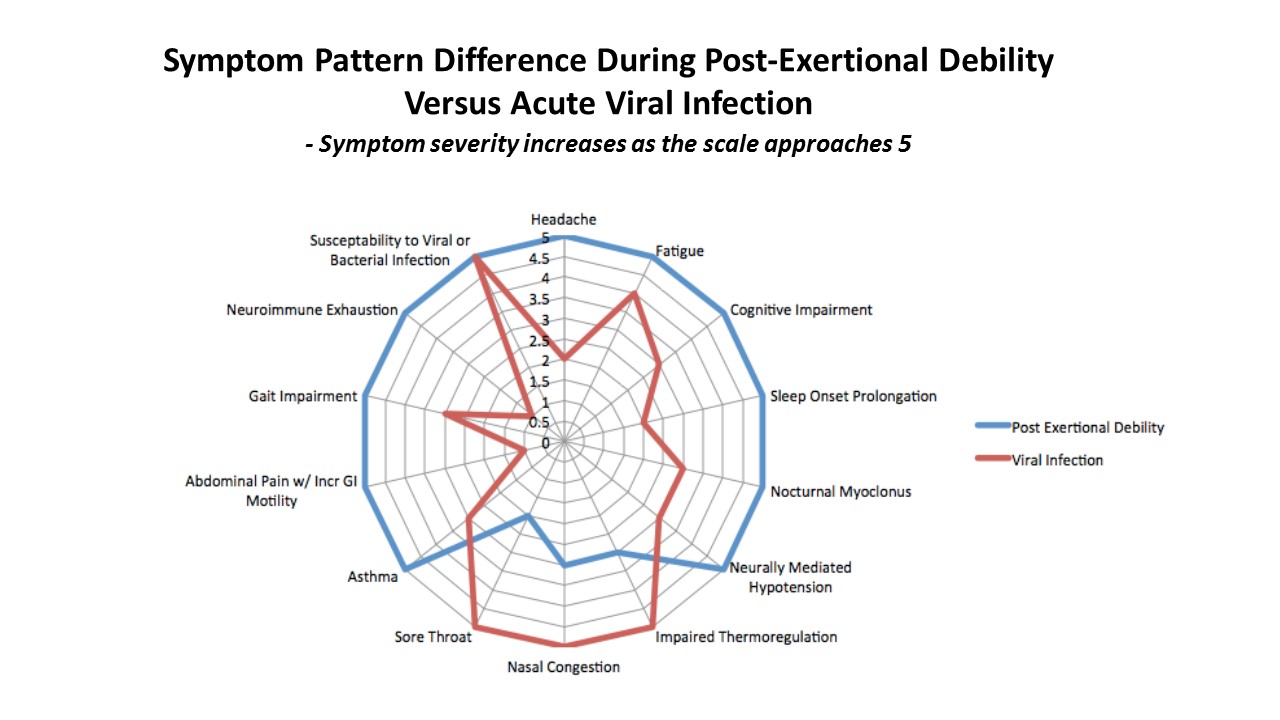 Approximately ten to twelve viral illnesses per year provide ample observations for comparison. The viral illness is usually severe enough to limit exertion which largely explains the difference in symptom pattern. Exertion is much more likely than a viral infection to cause severe: migraine pain, sleep abnormalities, orthostatic hypotension and gait impairment, which highlights the importance of distinguishing exertion-related symptoms. GI symptoms and neuroimmune exhaustion rarely occur during a viral infection.

It is also significant to note that most of the symptoms are consistently more severe following exertion, whether it be recreational or engaged in more arduous family business, than during an infection and the opposite would be seen if the disease were due to abnormal health beliefs.

I approach exercise as training during chronic disease with the goal of being as fit as possible to maximize what I am able to do and to attempt to increase cardiopulmonary endurance. My residency training was interrupted by lyme disease with cardiac and neurologic complications requiring long term IV and oral antibiotics for cure. Ten months of challenging physical rehab was needed which began with me standing for five minutes followed by two hours of sleep. Eventually I was able to complete the final two years of a demanding residency training and succeed at practicing surgery.

Fourteen years ago I was well enough to start exercising slowly. For the past five years I have been gaining muscle mass and some endurance. Compared to the previous rehab experience during residency, I am now putting in much more effort, the gains are smaller and much harder to achieve, either because of older age and/or a different disease mechanism. (The previous clinical, lab and radiologic evidence of lyme disease are long gone and now I have clinical, ganglion antibody and low epinephrine evidence of myalgic encephalomyelitis.)

Discussion
There clearly is debility following cognitive or physical exertion during myalgic encephalomyelitis that is a specific symptom or pattern of symptoms. I suspect there is variation between patients with idiosyncratic symptom patterns for individual patients. In contrast to a vague description such as malaise, post-exertional debility would be a more appropriate term for this symptom.

The delay of the onset of PED symptoms seems to be a useful clue to the pathophysiology. A process that takes several hours to begin and lasts for several hours has multiple causative candidates but if it involved micorglia and astrocytes seen on PET scans performed by the Japanese researchers these immune cells located around the thalamus, hypothalamus and pons may secrete cytokines and chemokines and begin a cascade of events involving oxidative and nitrosative stress spreading to the rest of the limbic system either directly or via interconnecting neuronal tracts. This scenario could be one way of explaining the PED timing and many symptoms since an inflammatory cascade can take time to occur, can persist and could create an environment of heightened excitation which in the thalamus can cause more pain, in the hypothalamus can overstimulate the pituitary leading to down regulation and lower hormone production, such as hypocortisolism during stress, and through connections to the autonomic nervous system could lead to low blood pressure issues and problems along the widely distributed vagus nerve.

An inflammatory environment around the hippocampus and its connections could explain difficulty forming short term memories, and slower information processing speed. Involvement of the amygdala could explain the hyper aroused state often felt after exertion described as being, “Tired but wired.” Pontine involvement could explain a variety of sleep abnormalities. These specific areas need not be directly involved with inflammation but their connecting tracts may be affected sufficiently to cause symptoms. If the exertion workload is increased to a point that a type of adrenal exhaustion occurs this could explain a larger delay and further symptom prolongation and still be consistent with this hypothesis.

Somehow the body senses that physical (muscular) or cognitive (nonmuscular) exertion has occurred and then triggers a symptom response. The brain makes it possible to perform the exertion and if part of it is itself inflamed then the brain is what initiates the process leading to symptoms. The observation of the high consistency of exertion followed by PED is consistent with this. It will be interesting if further studies support a limbic-pontine encephalitis hypothesis.

Other explanations for the delay of peak PED symptoms could be a multi-step process, an accumulation of molecules before a signal is triggered or the opposite, a depletion of molecules before a signal is triggered. The process may involve an mRNA transcription which takes a signal to begin and once begun requires a certain amount of time to complete. Feedback loops must exist that perpetuate the disease such as a possible cholinergic-immune reflex that connects the autonomic nervous system to adrenergic receptor on immune cells, oxidative and nitrosative stress. Genetic abnormalities may be a fairly ubiquitous interplay that is involved in the initial disease trigger and what keeps patients from slipping back into health.

Eventually the pathophysiology will need to include an explanation for the delay of the onset of PED symptoms and therefore post-exertional debility should be included in the definition of myalgic encephalomyelitis as a guide for research and clinical studies. Ambulatory monitoring with relatively inexpensive smartphone-connected devices may provide opportunities to collect “Big Data” of patient’s symptoms under various workloads compared with controls to further characterize the nature of post-exertional symptoms.

You can power the next wave of M.E. research

If You Have Chronic Fatigue or Myalgic Encephalomyelitis,