The year was 1989, six years after giving birth to my son and nine years into a career as the head of a private school. I was a single parent, in a serious relationship, active in volunteering, loved working out and had just finished overseeing a major construction project at the school.

One afternoon during a lunch meeting I started to feel like my equilibrium was off. Thinking I might be coming down with something, I returned to my office to lie down, hoping to feel better. I felt like the room was going to spin, my body ached all over and I broke into a cold sweat. I was so nauseous I thought I would throw up. I laid down on the floor and closed my eyes. I could not make sense of what was happening to me. I felt like my limbs and body were going to lose control. I was afraid to move. I laid on the floor for the remainder of the afternoon until I felt that I could go home.

My list of symptoms increased – among them, swollen glands and a chronic low grade fever – so I went to see my doctor.  Luckily, he was familiar with Chronic Epstein Barr and with my lab tests to prove it I didn’t have to go through the ugly maze of doctors telling me that there was nothing wrong with me.  However, my doctor had no idea of how to treat it. His best advice was “to continue working and ignore my symptoms”.  Since my initial symptoms would come and go, I took his advice. I thought I could navigate my illness and still handle the demands of my job. That lasted for two years and then I crashed. Hoping that I would rebound, I took a 7 month leave of absence figuring that it would make a difference.

Seven months later my symptoms had not gotten better, instead they exacerbated.  I had to write a letter of resignation. This loss was devastating. It was the beginning of a thirteen year struggle in my quest to become an active working member of society again. I had always been successful at overcoming difficulties… mostly through keeping a positive attitude and pushing forward. I could not understand why I could not improve or overcome this illness. My life slowed down. I was having to sleep 16-18 hours a day; a challenge since I was a single mother who wanted to be there for her son. I tried numerous alternative treatments and traditional therapies. Then a friend who had been diagnosed with the same illness died after receiving a new experimental treatment. I never knew if the treatment caused her death. Given this and my own reactions to many of the medications and treatments, I became cautious. Eventually I learned to trust my body, navigate how it reacted, and go with what I felt would make a difference. Through trial and error I learned that making adjustments to my diet, getting lots of rest, avoiding stress of any kind (even good) and not overdoing it helped.

Thirteen years later I was able to return to work. My high functioning abilities had returned and I was excited about using them. I took a Head of School position out of state, but immediately discovered that the school had more difficulties than revealed. The demands of the job were more than anticipated. After three months I started to experience mild symptoms but chose to ignore them hoping to succeed at all costs. I was renting my house, knowing I would return to Colorado someday. My plans were to work until retirement age or beyond. Moving back and having to pack an entire household after only working three months was not an option that I wanted to court so I continued to push myself.

I had forgotten how devastating my illness could be and my desire to fulfill my dreams of working again was strong. Being high functioning again after thirteen years of being ill, I made sure to give my all. The fear of having to pack up and move back to Colorado led me to take an anti-depressant, hoping that it would make a difference.  It took away some of the emotional aspects that surrounded my fears but it did very little for my physical symptoms. The only thing that helped was rest and sleep which I did whenever I was not at work, leaving me with no social life. Again, I started seeing an array of doctors and doing alternative therapies, hoping to find something that would help. I operated in that vein for 3 years doing my best to ignore my symptoms but they continued to get worse.

Two and a half years later I crashed and could no longer work. For the second time this illness stripped me of my profession. This time I did not feel like a failure; instead I had finally learned the anatomy of an illness that would not allow me to be a working member of society. This time I was able to adjust to my new life without the guilt or shame that can come with chronic illness.

There is an expression, “Hope Springs Eternal.”  I believe this applies to me as I continue my search for help. 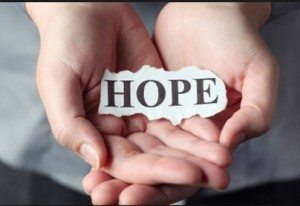 The claims that doctors and alternative practitioner make I now approach cautiously. Even though their intentions are good and they have had success with a number of patients, I know that my body can react negatively to many of their pills or treatments causing a downward spiral.

This is why I am so glad that the Solve ME/CFS Initiative is there. They are “Working to make ME/CFS widely understood, diagnosable and treatable”.  We are so fortunate to have a team like this working on our behalf. By pooling the information they have received from doctors, researchers, and professionals in the field, I believe they will find something that will help each of us on our journey to wellness. I encourage everyone that has ME/CFS and their healthy friends and family members to help the incredible team at Solve ME/CFS Initiative by signing up for their SolveCFS BioBank, following their progress by signing up for their newsletter, and supporting their work financially.