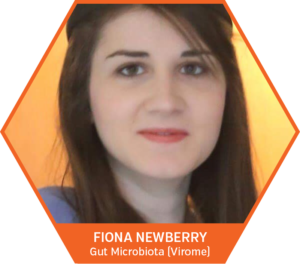 “Investigating alterations in the intestinal virome in CFS/ME”
PI: Fiona Newberry
Quadram Institute and the University of East Anglia

Fiona Newberry, a PhD candidate at Quadram Institute and the University of East Anglia in the U.K., designed a project to further understanding of the gut microbiome in ME/CFS, particularly the impact of viral populations. Simon Carding (PhD), of the Carding group at Quadram Institute and Tom Wileman (PhD), Director of the Biomedical Research Centre at the University of East Anglia, are co-Investigators on the project and bring extensive expertise in microbe-host interactions and their role in the development of disease. The researchers will use newly-developed techniques to examine bacteriophages (viruses that infect bacteria and impact bacterial populations) in ME/CFS patient samples as compared to controls.

Read the research study abstract below:

The precise causes of CFS/ME are unknown, but in common with chronic disease such as inflammatory bowel disease and type 2 diabetes, CFS/ME may be linked to changes in gut physiology and in particular, to alterations in the populations of microbes that reside within the gut called the microbiota. The microbiota is dominated by large populations of viruses, the majority of which target bacteria for infection and are called bacteriophages (phages). Phages can produce profound changes in bacterial populations by altering how they behave and function or by killing them. Ultimately this can result in the eradication of populations of “beneficial bacteria” in the gut leading to disease. Our study proposes to use powerful new DNA sequencing technologies and computer programs to identify populations of phages represented in faecal samples taken from patients with severe CFS/ME, and investigate whether these bacterial viruses have an impact on diseases. This will allow us to answer several important questions concerning CFS/ME. Do the phages differ between patients and controls? Can they reduce populations of ‘good bacteria’ or affect the metabolism of the microbiota? Can phage DNA signatures be used to develop biomarkers for CFS/ME diagnosis.