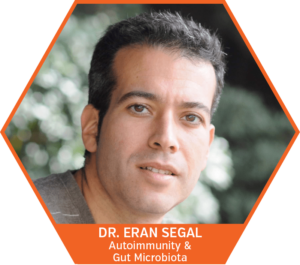 Dr. Eran Segal (PhD), Principal Investigator of the Segal Lab at Weizmann Institute in Israel, is leading a project exploring the potential gut microbiota-immune system interaction in ME/CFS. Working with Thomas Vogel (PhD), a postgraduate in his research group, Dr. Segal is using a multidisciplinary approach that combines novel experimental approaches and unbiased machine learning algorithms. In line with an autoimmunity hypothesis of the disease, the researchers will comprehensively examine the role of antibodies (the humoral adaptive immune response) against autoantigens and microbiota in ME/CFS patients and healthy controls.

Also, a pronounced involvement of the immune system and inflammation in ME/CFS has been proposed. Some evidence is even pointing towards autoimmunity, as ME/CFS is associated with the autoimmune diseases hypothyroidism and Sjögren’s syndrome. The immune system is crucial for the protection against pathogens such as bacteria and viruses. Yet, failure to discriminate between pathogens (non-self) and cells of the human body (self) can result in autoimmunity. Also, immune reactions against non-pathogenic (commensal or symbiotic) microorganisms can be a driving factor in autoimmune diseases (e.g. inflammatory bowel disease; Crohn’s disease). Treatment with Rituximab has elicited positive responses in the majority of ME/CFS patients in clinical trials, underlining an autoimmune aspect of ME/CFS. The monoclonal antibody Rituximab is specifically targeting the depletion of antibody producing B cells and routinely used for the treatment of lymphomas as well as autoimmune diseases (e.g. rheumatoid arthritis). The beneficial effect of Rituximab on autoimmune diseases is due to the depletion of autoantibody producing B cells. As Rituximab treatment alleviates ME/CFS in a considerable subset of patients, (auto) antibodies are believed to represent at least a contributing disease mechanism. Yet, it is currently unknown which (auto) antigens are targeted or to which extent the antibody repertoires between ME/CFS patients and healthy controls overlap.

Aside of this autoimmunological aspect, a dysbiosis of the gut microbiota in ME/CFS patients has been reported, in line with intestinal symptoms experienced by many ME/CFS patients.

In fact, humans are meta-organisms that maintain a diverse population of microorganisms on their barrier surfaces (such as the gut), collectively named the microbiota. The microbiota has co-evolved with its host over millennia and provides a range of benefits related to digestion, production of nutrients, detoxification, and protection against pathogens and regulation of the immune system. The intestinal microbiota is composed of 10 to the power of 13 to 14 microorganisms, with at least 100-times as many genes as in the human genome, termed the microbiome.

The microbiota is also engaged in a dynamic interaction with the innate and adaptive immune system, affecting different aspects of its development and function. When one or more steps in this fine “cross-talk” fail, autoimmune or auto-inflammatory diseases may occur. Despite concrete evidence pointing towards an involvement of autoimmunity and microbiota dysbiosis in ME/CFS, the exact mechanism (e.g. which antigens are recognized) and an interplay between the microbiota and immune system have not been systematically investigated yet.

Here, we propose a novel and broad approach to comprehensively study the role of antibodies against (1) autoantigens and (2) the microbiota in ME/CFS patients (compared to healthy controls). We believe that a combination of directed evolution approaches with next generation sequencing technology can serve as a powerful tool to test complex ME/CFS samples in a few simple steps. Especially, as only small amounts of patients’ blood samples are required, which can be collected in a simple and non-invasive way. In addition to gaining insights on disease mechanism(s) in ME/CFS, the identified (auto-) antigens may as well be used as potent markers for reliable diagnosis of ME/CFS.