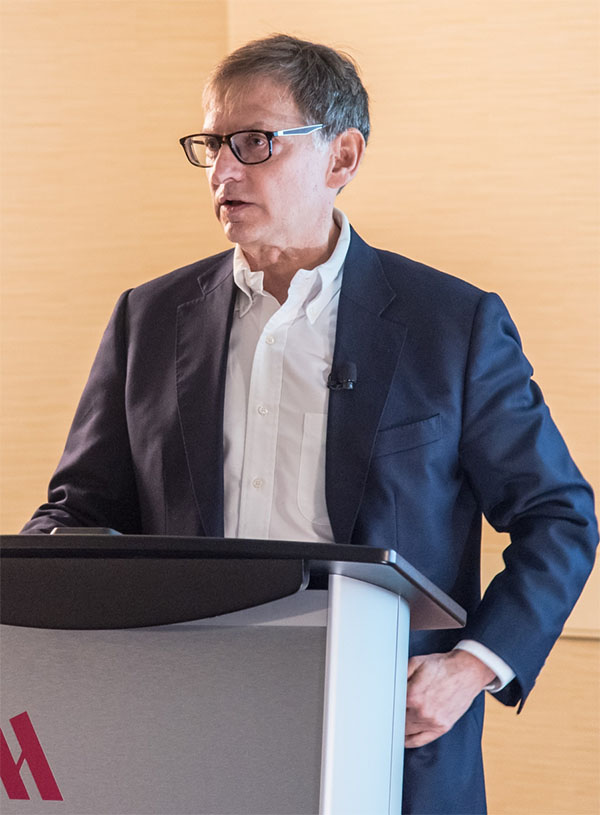 Dr. Ian Lipkin has over thirty years of experience in diagnostics, microbial discovery, and outbreak response. He has mentored and trained more than thirty-five students and post-doctoral fellows. He leads a team of over sixty-five investigators, post-doctoral fellows, and research and support staff in New York City with another 150 across the world. In the 1980s, Dr. Lipkin identified AIDS-associated immunological abnormalities and inflammatory neuropathy, which he showed could be treated with plasmapheresis. He also demonstrated that early life exposure to viral infections affects neurotransmitter function. He was the first to use purely molecular methods to identify an infectious agent. He pioneered the use of high throughput sequencing in pathogen discovery. He and his team implicated West Nile virus as the cause of the encephalitis epidemic in New York in 1999 and have discovered or characterized more than one thousand infectious agents. During the 2003 SARS outbreak, Dr. Lipkin assisted the World Health Organization and China.  He also came to the aid of Saudi Arabia in addressing the challenge of Middle East Respiratory Syndrome and helped the Indian government on the current unexplained encephalitis outbreak in Uttar Pradesh. He also directs large programs focused on autism and chronic fatigue syndrome wherein gene-environment interactions, such as infection and intoxication, are postulated to cause disease. Dr. Lipkin has been featured in several publications and served as the chief scientific consultant for the Steven Soderbergh film “Contagion.” 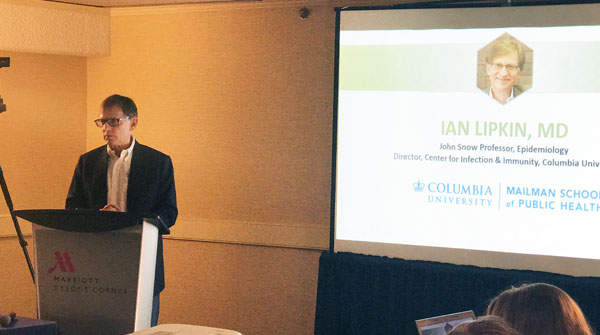 Twenty minutes is a difficult time frame. It’s too long for an elevator pitch, but too short to do more than describe the organizational structure of our center, list our investigators and resources, and describe our research aims. This information is already described in granular detail in interviews we’ve all given to Cort Johnson and others and will shortly be available on our website. Accordingly, I’ve decided to invest our time together in providing something that is not available elsewhere. My personal and professional perspectives on the history, current status, and future challenges of ME/CFS. Over an interval of close to forty years in medicine and science, I have been privileged to have a front row seat to view the evolution of molecular biology from the discovery of restriction enzymes to high throughput sequencing and synthetic biology. Our tools have changed, but much has not. In 1977, I practiced medicine in an Indian Health Service clinic in Tishomingo, Oklahoma. In 2017, I practice public health in a hospital in Gorahkpur, India.

First, congratulations to SolveME/CFS and everyone in this room. We finally have a seat at the table. I saw my first patient with ME/CFS in 1984 as a referral from Dan Peterson to UCSF. She came to me because, as the only resident in neurology who had completed three years of medicine, I was asked to see all of the HIV/AIDS patients and any patient who was medically complicated or potentially infectious. We had nothing to offer. My next intersection with ME/CFS was in 1997.  I was asked by Brian Mahy, director of the division of Viral and Rickettsial Diseases at the CDC—the same Brian Mahy who lost his position because he directed funds allocated for CFS research to arrest outbreaks of Sin Nombre virus in the southwest, H5N1 in Hong Kong, and Nipah in Malaysia. We can debate the wisdom of his decision; however, the funds were not taken for personal gain. He did this because there were no alternative paths to finding resources for public health crises. In reinforcing my earlier comments to the effect that much has not changed, we are still poorly funded today to address emerging infections like SARS, MERS, ebola and Zika. I had recently cloned Borna disease virus through subtractive hybridization and Brian wanted me to examine whether reports from Japan and Germany that BDV was the cause of CFS could be independently verified. As Birgitta Evengard, Jim Dobbins, and I ultimately learned, there was no relationship. This was my first experience in debunking poor science and set the stage for later work on echoviruses and ALS, MMR vaccine and autism, and XMRV and ME/CFS. These are important but thankless tasks that win few friends and are difficult to publish. There was, however, a silver lining to this project.  The antepenultimate paragraph of our paper proved prescient and provided early evidence that ME/CFS was associated with immunopathology. We noted that while three-fourths of patients had antibodies to BDV proteins they also had antibodies to a wide range of other proteins, including some not seen in nature. We posited an overactive immune system; however, there were no resources to follow-up our observations. In 2001 as I was moving from California to NYC, 9/11 changed the course of my career. As you will recall, the fall of the twin towers was followed shortly thereafter by anthrax attacks that spawned the development of the biodefense centers. I led the largest of these—the Northeast Biodefense Center that included 28 institutions in the greater metropolitan area: Albert Einstein, Columbia, Cornell, NYU, Rockefeller, Sinai, Yale and others. Toward the end of the second cycle of the award, I was asked by Anthony Fauci, Harold Varmus, and Francis Collins to examine the reports of new retroviruses linked to CFS. I wrote our XMRV proposal in the back of a conference room in Hanoi after touring a wet market. The XMRV project led to the assembly of the extraordinary team of basic and clinical researchers who comprise the leaders of the Center for Solutions for ME/CFS. Over a period of four years, with support from the Hutchins Family Foundation and a crowd funding initiative, we collected samples, data, and contributed to a growing body of evidence that ME/CFS was not a psychogenic illness. If not for the generous support of private individuals we would not have prevailed. My first two applications to NIH received the worst scores of my scientific career. The first study section informed me that microbiome research was irrelevant because ME/CFS was a psychogenic illness. The second study section maintained that ME/CFS was due to EBV infection. Fortunately, in the US, we get three swings at bat before we’re counted out. Continuing the baseball metaphor, with three ME/CFS centers on base we are well positioned to score.

A bit more on funding. For the past three years, I have served on the Advisory Committee to the Director of the NIH. This is a long term as most people serve for two years. My term ends in December. I have learned how initiatives develop and how they fail. I have also learned that although earmarks for specific diseases are discouraged by the administration, they are embraced by key members of Congress.  It’s not sufficient to be a squeaky wheel. You must know how and when to squeak. The NIH is facing unprecedented resource constraints that are becoming increasingly tight. Accordingly, staff are actively seeking interagency and public-private partnerships. This is an area where Solve ME/CFS could have enormous impact. I am happy to share my experience with building public-private partnerships for research in MS, Parkinson’s disease, autism and ME/CFS.

One of the most important issues that arose during my tenure on the board was the need for rigor and reproducibility. This sprang largely from mouse models that led to expensive and ineffective clinical trials for ALS. As we build our research program together, it will be critical that we share data, critique one another, and exploit a wide range of preclinical models before investing our limited resources in clinical trials.

Your colleagues at the Center for Solutions for ME/CFS are eager to collaborate with each of you. We also deeply appreciate the support of the ME/CFS community. I think every day of Vanessa Li–the beautiful young woman who initiated our crowd funding initiative before taking her life in 2015. I am frequently asked two questions by patients and journalists. The first is, Am I happy with the outcome of the ME/CFS RFA? Like Bill and Melinda Gates, I am an impatient optimist. We should have funded more centers with larger budgets. The second is can we do something substantive with what we have? Here I quote Cesar Chavez, Si se puede.