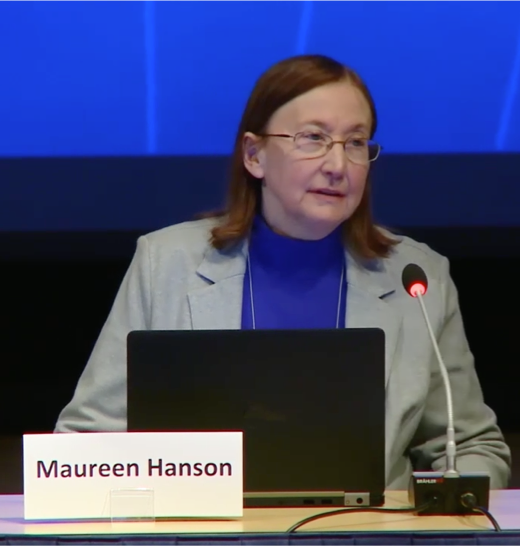 I would like to echo my thanks to Vicky [Whittemore] and Joe [Breen] and Andrew [Breeden].  Many of you don’t know how much time Joe spent on the phone with the organizing committee to figure out the program without enough slots for everyone we would have loved to have speak. and I know that Andrew, who is not up here, did an awful lot of logistical organizing for this meeting. so, I really appreciate that.

I outlined my remarks before Tony [Komaroff] gave his talk, and he will recognize similarities, we had some similar things to say.

We’re very lucky to have these three program officers, they advise the upper administration on research needs and opportunities. I believe the funding for the ME/CFS research centers wouldn’t have existed without their understanding of the importance of this neglected disease. and I suspect, had it been up to them, there would have been more than three research centers funded.

This is not a syndrome. this is a disease.

35 years ago, the incidence of ME/CFS greatly increased and although it wasn’t investigated by the CDC, there are physicians here today who will tell you the upsurge in cases in the mid ’80s was very real.  As Betsy Keller mentioned yesterday, it was already known 30 years ago that people with ME/CFS had abnormal exercise physiology, and reduced natural killer cell activity was already discovered at that time.

So, we knew the disease was biological even though certain people, especially in the UK, did not know that. But other discoveries were not made because of lack of funding. As reported in Hillary Johnson’s book, Osler’s Web, only two proposals were funded during the first four years after the NIH began accepting proposals to study ME/CFS. Many potential researchers left the field for better funded areas. Thirty years later – if we want to keep these young investigators that I’m very glad Vicky encouraged here to present their work – if we want to keep them in the field. we have to have funds provided so they can make research careers studying this disease.

What’s different now 35 years after the explosion of this disease?

Well, for the first time there are NIH program officers who understand how devastating ME/CFS is. There’s a Trans-NIH Working Group that’s taking input from the community and I encourage everyone to do that. The deadline is May 1.

There are individuals and patient organizations making a substantial amount of funding available that has allowed a number of important pilot studies that we heard about at this meeting and also there are three privately funded collaborative research centers. There are three NIH-funded collaborative research centers as well and the first data is beginning to emerge from them. There’s a very expensive and labor-intensive [NIH] intramural study to obtain a wealth of data never before available and it really couldn’t be done anywhere else.

At this meeting, we’ve seen analyses of the level of cytokines that were not even known to exist 35 years ago. It’s now possible to sequence whole genomes, microbiomes, and transcriptomes. it’s possible to examine immunological history, pathogen exposure with peptide chips, the functioning of brain can be examined through sophisticated imaging and we have computers and bioinformaticists to help with big data analysis. Now these are just a few of the arsenal of techniques that were not even imagined 30 years ago. And we also have the internet to allow rapid communication of new information and to allow patients to keep in communication with each other and with the world.

But like 30 years ago, what we don’t have is adequate funding. We still don’t have adequate respect for the seriousness of this illness. We have repeatedly heard there aren’t enough researchers interested in studying this illness. There aren’t enough ME/CFS researchers, so that NIH can’t fund more research. but the reason there aren’t more researchers is that the disease is extremely underfunded. This is a classic Catch 22, that NIH can overcome only by investing more funds despite the false narrative that no one wants to work on this disease.

At the time HIV was discovered, there was not a huge number of researchers working on human retroviruses. Then the floodgates of funds opened and people moved into the field.  How many retroviral researchers are there now?

Some who fled ME/CFS research found a home in the abundant support of AIDS research. Dr. Peter Rowe suggested at this meeting that we need something analogous to the Ryan White Initiative, that’s an initiative that resulted in not only survival but in much better quality of life for people living with HIV.

Maybe the ME/CFS Initiative should be the Lyndonville Initiative. Many children who became ill there in an outbreak in 1985 are still ill today suffering for 35 years along with the many adults who became ill across the country and in the world at the same time.

it needs to be recognized that people with ME/CFS lose their lives even though they don’t die.

Instead, to quote Mark Loveless, the head of the AIDS and ME/CFS clinic at OHSU, “….people with ME/CFS feel effectively the same as an AIDS patient feels two months before death. The only difference is the symptoms can go on for never-ending decades.”

Dr. Collins suggested we continue to hold him accountable so I challenge him to give the ME/CFS community the hope he mentioned by funding research that will lead to the breakthrough in ME/CFS that occurred in AIDS when HIV was discovered.

I would like Jose’s [Montoya] medical text book to become true as soon as possible. I believe this breakthrough is coming but it will come sooner if fueled by additional NIH funds. ME/CFS patients deserve the same hope patients with other diseases have been given through the resources that NIH can provide.

I agree with the quote that Dr. Collins gave us: “no action, no hope.”