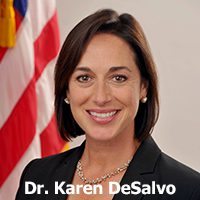 As reported in the August 5 update on the meeting between HHS and advocates for ME on August 1, Assistant Secretary of Health Dr. Karen DeSalvo had committed to follow up on specific actions and meet again in October. On October 24, Jen Brea, Terri Wilder, Carol Head, Jennie Spotila, and Mary Dimmock met again with Dr. DeSalvo and other HHS staff members to follow up on those actions and to reiterate the concerns that HHS’s actions to date, while encouraging in places, have lacked the urgency and magnitude of action required to address the challenges of this community in a time scale that matters to patients.

Also participating in the meeting from Health and Human Services were Dr. Karen Scott, Chief Medical Officer of the Office of the Assistant Secretary of Health; Dr. Nicole Greene, Deputy Director of the Office of Women’s Health; Gustavo Seinos, Designated Federal Official for the CFS Advisory committee (CFSAC); and Ben Panico, Special Assistant to the Assistant Secretary of Health. As in the previous meeting, Dr. DeSalvo and her staff were fully engaged, asked insightful questions, and suggested additional ideas for moving forward, particularly with CFSAC and ensuring that we don’t lose progress with the transition.

In the August meeting, Dr. DeSalvo had committed to reach out to the Precision Medicine Initiative and also to her counterparts at the Veteran’s Administration (VA) and the Department of Defense (DOD) to identify additional opportunities to advance ME. She had also suggested that there might be opportunities to make the CFSAC more responsive to needs when the charter was updated in September.

When we met in October, Dr. DeSalvo told us that both the DOD and VA were interested, with the VA particularly interested in the overlap with Gulf War Illness (GWI), a theme that was emphasized in the October conference at the NeuroImmune Institute at Nova University. That conference highlighted overlaps between ME and GWI, and demonstrated how work being done in GWI is potentially useful for ME patients. Furthermore, the DOD could be another potential funding source for ME through its Congressionally Directed Medical Research Program (CDMRP), which includes research on GWI. ME was included in the CDMRP in 2011 and has also been included as a comparison group in some GWI studies.

As a result of her efforts, the CFSAC charter was updated to include representatives from the DOD and the VA, and to include ME three patients or patient carers. The CFSAC charter was also updated to specify that the Assistant Secretary of Health is now responsible to coordinate and monitor CFSAC recommendations adopted by HHS and that CFSAC’s duties include making recommendations on ways to ensure that community input is incorporated in HHS policy and research. These changes should ensure greater accountability for HHS to achieve the goals and outcomes that matter most to patients. It will be up to the ME community to ensure this happens.

Dr. DeSalvo acknowledged that Centers for Medicare and Medicare Services (CMS) was no longer an ex-officio in the updated charter. But she noted that CMS has agreed to participate as needed in CFSAC meetings. She also stated that future charter changes could be made to address gaps and increase CFSAC’s effectiveness.

Dr. DeSalvo also noted that she had also reached out to the Precision Medicine Institute but that at this time, the sense was that ME research would be better served by research efforts focused specifically on ME, given the relative lack of knowledge about the underlying pathology of the disease. We also discussed the upcoming change in the administration and the impact that this could have on progress to date. Dr. DeSalvo stated that ME has been included in the packet of information being prepared for the transition teams. We provided a supplementary two-page document summarizing the most urgent needs of people with ME, and we will continue follow up with the new administration.

Finally, while HHS had begun to make progress, particularly with NIH’s efforts to ramp up research, we again emphasized to Dr. DeSalvo that HHS’s efforts were still too small, too slow, too uncoordinated, and too internally focused. This has left research funding still woefully inadequate and there are no plans to address the crisis in clinical care, to follow up in parallel on promising clinical trials, or to conduct much-needed epidemiological research. We also reiterated our concerns that CFSAC would not be able to provide the level of planning, coordination, and community engagement required to move the field forward.

More recently, we alerted Dr. DeSalvo to the widespread concerns with ME denialist

Together, the two meetings with Dr. DeSalvo resulted in steps to move the field forward in helpful ways and to take steps to ensure that the community does not lose traction during the transition. But much more will need to be done to achieve the magnitude and speed of response required to alleviate the suffering of patients with ME. Please make your voice heard by finding ways to get our story into the media, by continuing to contact your congressional leaders to call for change, and by attending the upcoming CFSAC meeting in Washington, D.C. and on the web on January 12 and 13, 2017.

You’re At the Center: Learn How the CFIDS Association is Fostering Developing of Safe and Effective Treatments for ME/CFS