There is clearly something in the (ME/CFS) patient’s serum, – Bhupesh Prusty PhD of the University of Würzburg in Germany.

What an intriguing character Bhupesh Prusty is. Speaking just minutes after Ian Lipkin reported that he could find no evidence that herpesviruses are playing a role in ME/CFS, this young German researcher from the University of Wurtzburg suggested that HHV-6 infections are alive and well in ME/CFS and are putting a hammer to cellular energy production.  The title of his talk “Pathogenic Alterations of Mitochondrial Dynamics: A Working Model for ME/CFS” said it all.

Funded by the SMCI’s Ramsay Awards to study ME/CFS (as well as the HHV-6 Foundation), he was one of the few researchers from outside the U.S. to present. The NIH must have thought he was doing something right to get him over here.

Over the past year or so, it’s become pretty clear that something is up with the energy production of our immune cells. Could it be a pathogen? In what was one of the more provocative talks of the conference, Prusty made it clear he thought so. The association between pathogens and ME/CFS is clear: from the Dubbo studies on, the data is very clear – whether it’s EBV or another herpesvirus, or giardia or Coxsackie or another pathogen, any serious infection is typically going to leave a subset of people in a long lasting ME/CFS-like state.

Prusty, like Naviaux, believes the mitochondria are much more than the energy producers of our cells – they also play a key role in the cell’s antiviral response.

Prusty’s data indicates that HHV-6A – the more pathogenic of the HHV-6’s – prevents the mitochondria from combining together to form the elongated forms that participate in antiviral defense. 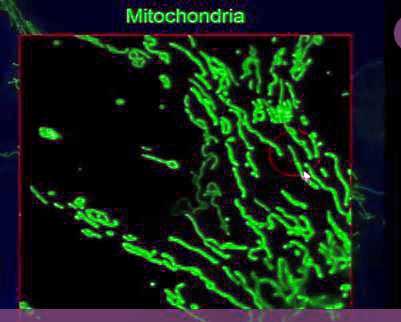 Prusty found a miRNA in charge of breaking the mitochondria up. HHV-6A not only promotes the expression of this miRNA, but produces a bit of RNA (sncRNA-U14) which also prevents the mitochondria from joining together to knock out viruses. Plus, viral reactivation causes ATP levels to drop.

Prusty then showed that the piece of RNA he believes is jamming up the works of the mitochondria is found throughout the herpesvirus family.  He called it a “potentially universal” approach pathogens take to affect the mitochondria. 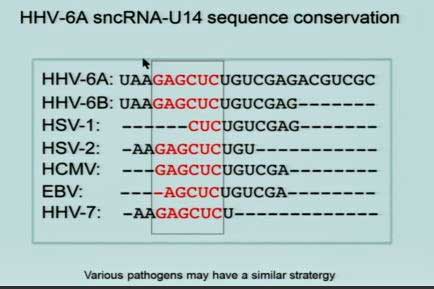 But what about HHV-6A? Lipkin just reported that he was unable to find any evidence that HHV-6 is playing a significant role in ME/CFS. Prusty looked and looked and looked. The blood and serum were a wash. The PBMC’s were a bit better, but when he looked, there wasn’t that much there there – even when the virus was present – the loads were low.

Was another beautiful hypothesis about to bite the dust? Prusty then looked for evidence that his mystery RNA was present in blood clot cells and found it – in about 40% of patients and in none of the controls.

Then some serendipity struck. Fluge and Mella had just published a paper, and Ron Davis had suggested that something in

ME/CFS patients’ serum was interfering with ATP production – causing what Prusty called a “senescence” – something similar, one would think, to the hypometabolism proposed by Naviaux.

When Prusty added ME/CFS patients’ serum to his culture, the mitochondria began to break up. Adding supernatant from an HHV-6 reactivation caused the same process to occur.

It was great to see Ron Davis’s and Fluge/Mella’s serum findings replicated over in Germany in a completely different cohort. While only one study showing these findings has been published, the fact that serum from ME/CFS patients from the U.S., Norway and Germany appears to be producing the same results is good news indeed.

Referring to a graph which I couldn’t make sense of, Prusty reported that removing ME/CFS patients’ serum from the cells produced a startling transformation – the mitochondria began to come together, reproduce their elongated forms and appeared healthy again.

Prusty is attempting to isolate that mysterious, mitochondrial-inhibiting factor in a very interesting place – the exosomes that Maureen Hanson is examining in her NIH research center. Exosomes – small vesicles that kind of burp free from the cells from time to time – are a different form of cellular communication. By releasing their contents or otherwise communicating with other cells, they’re able to alter cellular function. If something in ME/CFS patients’ serum is causing problems, it could be an exosome. Alternatively, high levels of oxidative stress, small RNA’s or cytokines or other proteins could be the issue.