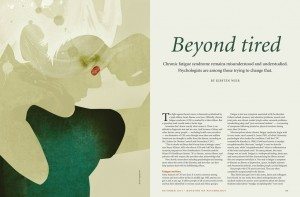 The Monitor on Psychology is a well-respected publication of the American Psychological Association (APA) – the largest scientific and professional organization representing psychology in the United States. According to its website, “APA is the world’s largest association of psychologists, with nearly 130,000 researchers, educators, clinicians, consultants and students as members.”

In May of this year a freelance reporter, Kirsten Weir, contacted the Solve ME/CFS Initiative (SMCI) concerning an article she was writing about Chronic Fatigue Syndrome for the Monitor. She was hoping we could get her in touch with a patient that could answer a few short questions about living with the disease.

Understanding that far too many ME/CF patients have been adversely affected by the painful practice of dismissing ME/CFS as a psychological disorder vs treating it as the debilitating physiological disease that it is, we asked her to tell us more about the goal of her article. In her reply she told us, “The goal of the article is to update readers on the latest thinking behind ME/CFS — to underscore that it has biological roots and is not a psychological condition. To look at what the science says about possible causes and best approaches to managing the disease. I’ve spoken to several researchers who noted that patients are really frustrated by the myths and misunderstandings associated with the disease, and I’m aiming to find some patients who can speak to that issue.”

With that understanding, we reached out to several patients to inquire as to their willingness and availability to talk to Ms. Weir for her article. Anna Zapp and Carollynn Bartosh both agreed to be interviewed via email, thrilled that the interview pointed to the American Psychological Association acknowledging bio-organic roots of ME/CFS. Bartosh remarked, “It’s been a very long time in coming, and I am honored to be asked for an interview as a patient under the circumstances.”

She went on to tell Weir, “I think my fellow patients would want to be sure that practicing psychologists are aware of the fight that happened over the American Psychiatric Association including CFS as a somatoform disorder in the DSM-V. In 2010 all of the leading clinician-researchers and advocacy organizations from around the world, not just the US, as well as many patients such as me wrote letters pointing out the more than 2,000 studies published by that date into the bio-organic roots of the illness. Including CFS as they did seemed to ignore the science while offering no improvement in care for patients so diagnosed. I’m certain that many patients have been, are, and will be quite hurt by that inclusion, even by well-meaning psychologists.”

Earlier this month the October issue of the APA Monitor was released and Weir’s article appears on page 67-71. You can read the full text here: http://www.apamonitor-digital.org/apamonitor/201410#pg70

This is a story that is long overdue. As the largest association of psychologists, the APA can and should play a role in dispelling disbelief that ME/CFS is a serious, debilitating illness. SMCI is happy to have helped this article come to fruition, but there is still work to be done. Old habits and attitudes can take time to be torn down, as evidenced by the quote pulled out at the top of page 69, which seems completely out of context with the rest of the article. 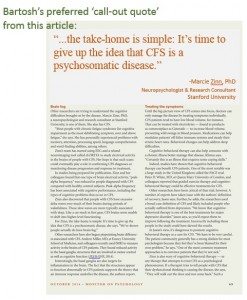 Upon seeing the article, Bartosh, who is quoted in the piece, shared with us her preferred ‘call-out quote’ as the take-away from this article:

“…the take-home is simple: It’s time to give up the idea that CFS is a psychosomatic disease.”
-Marcie Zinn, PhD, neuropsychologist and research consultant at Stanford University

And we agree. Treating ME/CFS as a psychosomatic disorder is a practice that simply must end. It is our hope that this article in the hands of more than 130,000 professionals that are in a position to incite that change will begin to move us all forward.

Going the Extra Mile for ME/CFS